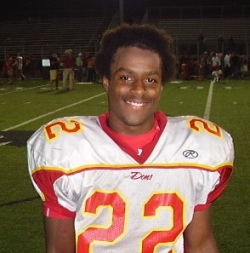 Story and photo by Christopher Mohr

(LA MESA) - Coming from behind to win games can lead to dramatic finishes, such as the wins Helix had in its first two games against Rancho Buena Vista and Mira Mesa. However, when you spot an opponent four touchdowns and that opponent is Cathedral Catholic, comebacks go from being difficult to nearly impossible.  Helix needed a miracle, but fate favored the Dons.

It's too early to say whether or not Cathedral will be able to duplicate its undefeated 2008 season that ended in a state championship. Whatever the Dons lost with the graduation of last season's stars, such as Tyler Gaffney, does not appear to have slowed them down much, if at all.

No one is going to say that you can replace a player like Gaffney, but the next best thing may be Jonny Martin. He burst free for a 47-yard touchdown on the first drive of the game to give Cathedral an early 7-0 lead. Martin finished the night with 231 yards and three touchdowns.

"The O-line was out there just working hard, making all their blocks, which makes it way easier for me, our quarterback and our wide receivers," Martin said, when discussing his preformance. It's hard to argue with Martin as Cathedral has two 300-pounders to open holes for the running backs in Alex Crosthwaite and Mustafa Jalil.

Martin also credited the defense for getting the ball back for the offense frequently. Jordan Lance and Eric Sapp were among the Cathedral defenders that gave the Highlander offense grief. Both players delivered bruising hits while Sapp added an interception.

"You just make your reads and I happened to be in the right place at the right time," Sapp said about his interception. "He was staring down 85 the whole way. I think he was trying to throw to the seam, but I just jumped underneath it," added Sapp, referring to the pass from Helix quarterback Jake Reed, apparently intended for Sam Merideth.

No matter how good the opponent, any loss is a disappointment, but Reed expressed optimism in spite of the loss: "We're not going to hold our heads down; we played hard tonight; they're just better than us."

In spite of the loss, the Highlanders made their share of great plays. Reed threw three touchdown passes to Cameron Lee, including a 60-yarder, to account for all scoring by the Scotties.

"He played great tonight. We really needed him to step up and he did," Reed said about Lee's effort.

Helix (2-1) makes a trip south this Friday to face the Otay Ranch Mustings while Cathedral (3-0) hosts the Carlsbad Lancers.