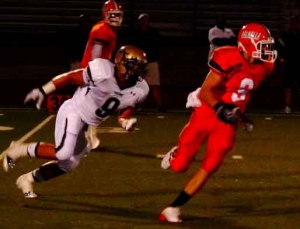 (EL CAJON) - Friday night's football game at Valhalla High School between the host Norsemen and the visiting Falcons from Our Lady of Good Counsel of Olney, MD drew a lot of interest from local fans. Good Counsel was ranked sixth in the state of Maryland while Valhalla has a good shot at a return visit to the sectional championship at Qualcomm Stadium in December. This game was the season opener for both teams.

In spite of their collective talent, both teams made plenty of errors by committing penalties and surrendering turnovers. Unfortunately for Valhalla, their mistakes proved to be more costly, enabling Good Counsel to take the lead late in the game and return home with a 28-16 win.

The prevailing observation from the home stands before the game was about how big the Good Counsel players were. Although the Falcons have excellent team speed with players like E.J. Scott and Stefon Diggs, the look and feel of their offense was more like the grinding, run-it-down-your-throat style of the Pittsburgh Steelers than the St. Louis Rams' aerial show of a decade ago.

Wary of the skill of Valhalla quarterback Peter Thomas, the Falcons sought to keep him on the sideline as much as possible. Their grinding offense served them well in this regard on their opening drive in the first quarter. Good Counsel ate almost half a quarter off the clock with an 11 play, 5:59 drive that covered 61 yards and culminated with a two-yard touchdown run by Zach Dancel to give the Falcons a 7-0 lead.

Valhalla got on the board midway in the second quarter on a one-yard run by Thomas. The drive was set up by excellent field position as the Norsemen took over at Good Counsel's 33-yard line. Michael Bazzi caught passes of 18 and 12 yards to set up Thomas' scoring play, and the game was tied at seven.

The coaching staffs will not be pleased with the penalty totals from their respective teams. Good Counsel committed 10 penalties for a total of 83 yards. In the span of only a few minutes, they committed three 15-yard penalties, including two on the same play. Valhalla, although penalized less often, likely committed too many penalties for their coaches' liking with a total of eight penalties for 70 yards.

Included in the penalty totals for both teams were the kinds of penalties you might expect to see more often this early in the season: false starts, delay of game, illegal substitution and encroachment.

The turning point in this game may have been set up by a combination of a strategy that backfired and an ill-advised penalty by Valhalla. On the kickoff after his field goal, Giandoni kicked the ball out of bounds on an onside kick attempt at Good Counsel's 40-yard line. Good Counsel chose to take the ball at that spot, starting their next drive with excellent field position.

The Falcons' momentum was further fueled by an unsportsmanlike conduct penalty committed by Valhalla, moving the ball from the Norsemen's 45-yard line, 15 yards closer to the 30-yard line. Two plays later, Michael Nittoli scored on a 24-yard run. The point-after attempt failed, but Good Counsel took the lead at 13-10.

Valhalla's luck quickly became a case study on Murphy's Law. Louis Young intercepted a pass from Thomas on the ensuing drive. After catching the ball, Young lateraled the ball to Al Thompson, who returned it to the Norsemen's 10-yard line.

On the following play, it looked like Valhalla caught a break when Good Counsel's Wes Brown fumbled and the Norsemen recovered. However, this break was short-lived when just two plays later, Joe Rosenblatt intercepted a pass from Thomas and returned it 12 yards for a touchdown. Michael Jefferson caught a pass from Dancel for the two-point conversion extending the Falcons' lead to 20-10.

Reading the screen and taking a stay-at-home approach was a critical part of the success of Good Counsel's defensive line. In addition to Rosenblatt's 'pick six', Thomas Kokolas batted down two passes and and sacked Thomas for a nine-yard loss.

"I just took off, outside on the edge and just got to the quarterback and brought him down. I got a good takeoff," Kokolas said about the sack. "In practice, we worked a lot on the screen plays, you know, staying at home, not getting up the field."

The Falcon defense had impressive tallies for the game: three interceptions and five sacks for a total of 34 yards.

Adding further to the troubles of the Norsemen was losing standout defensive lineman Shane Pennix to injury in the second half.

Brown scored on a 24-yard touchdown run to close out the scoring for Good Counsel while Valhalla added a late touchdown on a pass from Thomas to Andy Lopez as time expired, to make the final score 28-16.

Next week, Good Counsel faces Mt. St. Joseph in Baltimore, while the Norsemen play another home game against Grossmont, which won their season opener against Otay Ranch, 16-14.

Also folks, we are looking for sponsors for our new sports section!  If you want to show your support for East County youth sports, or just want to reach sports fans including high school students and their families, we'd love to hear from you.  Contact ads@eastcountymagazine.org.