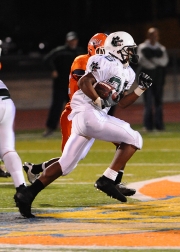 (RANCHO SAN DIEGO) November 27 - That's why they play the game. Such a statement is typical after a game like Friday night's playoff matchup between the visiting Highlanders of Helix High School and the host Norsemen of Valhalla High School.

As fans and self-proclaimed experts, we often play the game on paper, giving out predictions and speculation without regard to the fact that the game is played on a field. Most of the time we get away with it, but this wasn't one of those times.

Helix pulled off a 24-20 upset over Valhalla Friday night that defied conventional wisdom in so many ways. Prior to Friday's game, Valhalla had an 8-2 record while Helix was 7-4. When the two teams faced each other a month ago, it was Valhalla who won 28-14. It came as little surprise that Valhalla earned the number two seed, while Helix was seeded lower at seventh when playoff pairings came out two weeks ago.

The loss of Helix starting quarterback Jake Reed, who injured his ankle in last week's 18-17 win over Westview, forced him out of the lineup and put the team at an even greater disadvantage. If the Norsemen had all these advantages and could beat Helix 28-14 with Reed, they should have had no trouble beating Helix without him, right?

That's why they play the game. Not only did the Highlanders pull off the upset without their usual starting quarterback, they did it largely on the strength of performances by two players who were not even listed in the program: Brandon Lewis and Darren Hancock.

Lewis' performance at quarterback was solid as he finished the night completing 10 out of 15 pass attempts for 129 yards and one touchdown. His performance and execution of the offense could make picking a starting quarterback a challenge next season for head coach Troy Starr.

Hancock had an unforgettable performance at running back with 19 carries for 125 yards. He scored a touchdown on the first drive of the game on a 12-yard run that put the Highlanders ahead 7-0. It capped off a nine-play drive that covered 71 yards and consumed 5:01.

Hancock left no doubt as to why he was so successful running the ball:  "The o-line was blocking all the time; I always depend on my o-line to do their job. Without the o-line I'd be nothing."

Helix' approach from the start was obvious: run the ball effectively to control the clock and keep the high-scoring 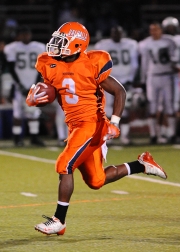 Valhalla offense on the sideline as long as possible. It was an effective strategy as Helix had the ball for 18:17 out of a possible 24 minutes in the first half.

This wasn't the first time that Valhalla's opponents resorted to ball control. The usual response by the Norsemen to this strategy has been to score quickly, which they did later in the first quarter on a four play drive that only took 1:53. Pete Thomas completed four passes for 68 yards, including a 42 yard play to Michael Bazzi. It set up a six-yard touchdown reception by James Leighton that tied the game at seven.

Both teams continued to keep the game close in the second quarter. Lewis scored on a four-yard run to put Helix ahead 14-7. Valhalla answered quickly when Traivonne Brown scored on a 12-yard touchdown run, but the point-after attempt was no good, allowing Helix to hold onto a slim lead, 14-13. The missed attempt was symptomatic of the miscues the Norsemen experienced the rest of the game.

Valhalla's next drive lasted only two plays, but it was not because of its quick-striking offense. Thomas was sacked for a six-yard loss, then Brown fumbled the ball on his own 37-yard line and Helix recovered. Fortunately for Valhalla, Helix came up short on a last-second attempt to score a touchdown before halftime. Lewis completed a 36-yard pass to Sean Linton, but Linton went down at the two-yard line as the clock ran out. 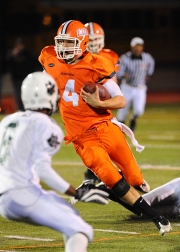 "I don't know what it was," Thomas said about the apparent mixups getting the plays in after the timeouts, "Traditionally we have never come out good out of a bye week. Our last bye week at halftime we were down 21-10 to Mt. Miguel, but that's no excuse."

Helix continued to hang tough with favored Valhalla as Vann Sabin kicked a 28-yard field goal to extend the Highlander lead to 17-13. Their 'no-name' ball control offense was not dazzling, but it was not making many mistakes either. They would finish the game with a time of possession of 33:19 (out of a possible 48 minutes) and surrender no turnovers.

"We just had to execute everything, we couldn't have any mistakes. Mistakes would have cost us. We do what we did pretty well tonight," Lewis said about the offense's performance, "We still have some work to do for next week."

On the Norsemen's next drive, the mistakes continued with a bad snap on one play followed by a partially blocked punt on another that gave the Highlanders a short field as they took over on Valhalla's 20-yard line. Just three plays later, Lewis found Sam Merideth on a seven-yard touchdown pass play to make the score 24-13.

When Brown broke loose on a 67-yard touchdown run to make the score 24-20 in the fourth quarter, it looked like Valhalla might get back on track, but Helix would have none of that. The Highlanders continued to take time off the clock with a 13-play drive that consumed 5:20 of game time, and their defense kept Valhalla from threatening to come back.

"It was a hard fought battle, they played really good; we just couldn't pull it out," Thomas said about his team's loss.

With the win, Helix improves to 8-4 and travels next week to Scripps Ranch to face the 7-5 Falcons in the semifinals for Division II.

Although disappointed, Valhalla finishes the season with an 8-3 record. This was one of the best seasons in school history as the team won their first league title.

Christopher Mohr is a freelance writer in the San Diego area and is a huge Chargers, Padres and Detroit Red Wings fan

To see how other East County teams did Friday, and upcoming semifinal matchups click here (opens a new window)