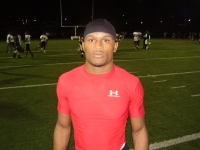 In Friday night's game at , the visting Matadors of Mt. Miguel High School found success through simplicity in their 44-21 win over the Highlanders. The more they gave the ball to their star running back, Derral Hunter, the more it paid off for them. He scored five touchdowns and ran for over 300 yards, allowing the Matadors to close out the regular season with a huge exclamation point.

Natone Morgan helped the Matadors gain early momentum by intercepting a pass from Jake Reed. A.J. Stanford then did just about everything a quarterback could do to Miguel's cause on the following drive. He ran with the ball, caught the ball and threw the ball before connecting with Bryant Mitchell on a 38-yard pass play that went for a touchdown and gave the Matadors an early 7-0 lead.

Helix took back the momentum in the second quarter with a vengence. Cameron Lee made a spectacular one-handed catch of a pass from Reed for a 19-yard touchdown play to tie the game at seven. Reed continued to go to the air on the Highlanders' next drive and connected with Sean Linton on a 29-yard touchdown pass play to extend the Helix lead to 14-7. 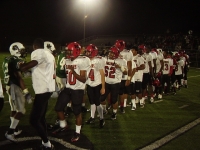 closed the Helix lead to four when Jorge Medina kicked a 37-yard field goal for the Matadors to make the score 14-10 at halftime. So far, the game was the closely contended matchup between two rivals that most expected it to be, but that changed dramatically in the second half.

That's when started letting Hunter carry the ball more. He only carried the ball 11 times in the first half for a relatively pedestrian total of 47 yards, but would have more than five times that total in the second half.

went exclusively to the run on their first drive of the second half with 11 plays that covered 67 yards. Nine of the runs were by Hunter, who capped the drive with a one-yard touchdown run that gave the Matadors a 17-14 lead. He added a six-yard run for a touchdown later in the third quarter that extended the Matadors' lead to 24-14.

The Highlanders' offense struggled to move the ball in the second half as their first two drives both ended with three-and-outs. In the meantime, Hunter added another six-yard touchdown run to extend 's lead to 31-14.

Although Helix was able to move the ball with some success on their next drive, the drive stalled after 11 plays and took over on downs. Coming from behind was not new to the Highlanders' offense. They did so in wins at Rancho Buena Vista and at home against Mira Mesa earlier in the season.

If the previous drive stalling after eleven plays did not end any hopes of a Helix comeback, Hunter soon would. He broke free for an 82-yard touchdown run midway in the fourth quarter, to make the score 38-14 and end any hopes of the Highlanders coming back. 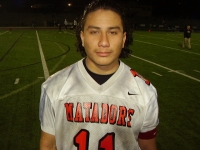 "One thing was the key block with Willie Morales," Hunter said about why he broke away on the big run, "I just told Willie, 'Get to that linebacker and it's over' and that's when he got the job done."

In addition to his blocking, Morales added a 34-yard pass reception and a 14-yard run.

The icing on the cake came when Hunter added another touchdown run, this time for 70 yards, to make the score 44-14. From that point on, reserves for both teams played the rest of the way. Jimmy Pruitt ran for a four-yard touchdown in mop-up duty for Helix to make the score somewhat more respectable at 44-21, but after Hunter's performance it was little more than a technicality.

Hunter finished the night with 326 yards on 29 carries. All five of his touchdowns and 279 of his rushing yards came in the second half. That's further than Usain Bolt runs in a track meet!

As to why the team had so much success with the running game in the second half compared to the first, it depends on who you ask.

One theory is that 's offense was so pass-heavy in the first half that it induced the Helix defense to overcommit to defending against the pass.

"We threw them off with the passing game in the first half. We got to talking at the half and came out in the second half with the run and just destroyed them with it," Hunter said about the second half surge.

Stanford seems to agree: "They were sitting back in coverage waiting for us to pass, so we just came and ran the ball down their throats the second half."

From Morales' perspective, success was simply a matter of execution: "We just kept going at it and at it and it worked," he said about the team's effort, "We just kept doing what we do."

Whatever the reason for 's success was, one thing is clear: whoever their opponent is in the playoffs won't get very far if they don't slow Hunter down. 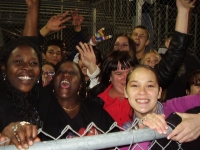 With the win, finishes the season with a record overall, in Grossmont South League play. They will play in the CIF San Diego Section playoffs for Division III.

Helix drops to 6-4 overall with the loss and 2-3 in Grossmont South League. They will most likely play next week in the opening round of the playoffs for Division II.

We will provide coverage on the CIF San Diego Section playoffs when the brackets have been announced.