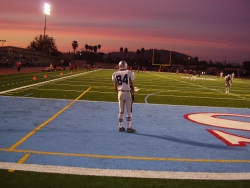 Although the Braves were unable to convert the first fumble they recovered into points, they wasted little time in converting the second one. Patrick Johnson made an incredible leaping grab of a pass from Alex Hann for a 27-yard gain on the first play of the series. Three plays later, Johnson ran the ball in from 11 yards out. The point after attempt failed, but the Braves led 6-0.

After the third fumble they recovered, ECV only needed one play to score a touchdown. Johnson ran the ball in again, this time from 45 yards out. Hann scored on the two point conversion on a well executed misdirection run to extend the Braves' lead to 14-0. ECV appeared to be well in control of this game while Christian simply hoped for anything positive.

The positives did not come easily for the Patriots. After an eight play drive, they settled for a 23-yard field goal by Michael Gruber and trailed 14-3 early in the second quarter. Momentum still favored the Braves, and from the Patriots' point of view, they must have felt that the only way they could catch a break was to create one themselves, so they attempted an onside kick. 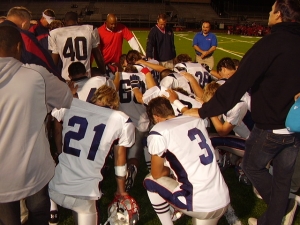 The Patriots' gamble paid off as Gruber's execution of the onside kick was near perfection. He kicked the ball into the ground, straight ahead and fell on it after it had traveled ten yards. No Braves player was even close to Gruber when he recovered the kick.

Christian took advantage of the break they created for themselves with a 10 play drive that took 3:32, resulting in a five-yard touchdown run by Steven Pitts. The key play on the drive was a 23-yard pass by Shane Dillon to Tyrone Sauls. The Patriots had pulled to within four, trailing 14-10.

Not willing to surrender momentum easily, ECV went on an extended drive of their own. After 11 plays that took 4:19, Hann scored on a 12-yard run. It was another misdirection play where Hann faked a handoff to Johnson to draw the pursuit of the Patriots' defenders. With all the attention on Johnson, Hann still had the ball and easily ran into the end zone. A.J. White added a two-point conversion run to extend the Braves lead to 22-10.

The next drive was going to be huge for the Patriots. The Braves were already ahead by two scores and would get the opening kickoff for the second half. If Christian came up with anything less than a touchdown on this drive, it seemed likely that ECV could put the game out of reach.

If the Braves wanted to help put this game out of reach, they did little to help the cause. On the first play of Christian's next possession, Martin Ruiz ran free for a 19-yard gain. A personal foul penalty on the Braves added 15 yards to the end of the run. Ruiz then added a 22-yard run on the next play. In just two plays. the Patriots had covered 56 yards and were already on the ECV 12-yard line.

Breakdowns on the Braves' defense continued as pass interference and encroachment penalties eventually put the ball on the three-yard line. Two plays later, Pitts scored a touchdown on a three-yard run, cutting ECV's lead to 22-17 at halftime.

Christian did what they needed to, but were not out of trouble yet. ECV was supposed to receive the second half kickoff. If the Braves scored a touchdown, Christian would be down by two scores and not any better off than they were on their last drive before halftime. Hann and Johnson had been successful moving the ball for ECV's offense, so the threat of a two score deficit was very real.

The Patriots decided that it was time to gamble once again on the play that worked for them earlier: the onside kick. Once again, the Patriots were successful in recovering the ball.

"We noticed on film how they were backing up, they were like five yards behind ten yards where the ball has to go," Gruber said about the onside kick attempts, referring to the fact that the front line of the ECV kick return unit lined up deeper than other teams usually do. Eleven plays later, Gruber kicked a 36-yard field goal to make the score 22-20.

The Patriot defense seemed energized by the change in momentum and forced the Braves to do a three-and-out on their next possession. After ECV's punt went out of bounds at Christian's 45-yard line, what happened next was something straight out of Ripley's Believe It or Not.

On the next play, Ruiz carried the ball 15 yards before coughing it up at the ECV 40-yard line. For a brief moment, Patriot fans went from feeling despair to unbridled joy as teammate Joel Alesi picked up the loose ball and took off, running as fast as a big lineman can. After Alesi lumbered into the end zone, the Patriots failed on a two-point conversion attempt, but led for the first time, 26-22.

"I saw that guy coming in for the hit and I saw the ball pop out, and I was like, 'I'm taking this ball' and just turned around and ran with it," Alesi said about the play.

Alesi wasn't finished adding to his highlight reel. On ECV's next possession, he intercepted a screen pass and returned it 45 yards for a touchdown to extend Christian's lead to 33-22.

"I read screen, the linemen held us up and then went back to the linebackers and I was like, 'The ball is coming right here,' and looked at the receiver right next to me and picked it, took it back," Alesi said about his interception return. Gruber added a 26-yard field goal to make the final score 36-22.