(RANCHO SAN DIEGO) October 16 - Friday night's game between Valhalla High School's Norsemen and the Mt. Miguel Matadors had nearly everything a fan could want: a closely contested match between two competitive, talented teams that would not be decided until almost the last minute. It was a game that truly lived up to all the hype it received beforehand.

It was also a matchup that highlighted star players, such as Valhalla's Pete Thomas and Mt. Miguel's Derall Hunter. Thomas, touted by many as the best quarterback in the section, is headed for Arizona State next fall. Hunter broke the Matador team record for rushing yardage and is high on the list of several college recruiters.

It's an unfortunate aspect of team sports that both teams cannot both win a great game like this. After taking an early 21-7 lead, Mt. Miguel gave up 29 unanswered points to Valhalla and came up short in its  late comeback bid, losing 36-29. 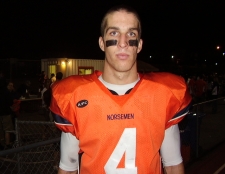 Valhalla only needed two plays to get on the scoreboard first. A negative one-yard punt by Mt. Miguel's Joaquin Ibarra gave the Norsemen great field position on the Matadors' 27-yard line. Nino Mallory ran for eight yards on the first play of the drive and followed up with a 19-yard touchdown reception to put Valhalla up 7-0.

"It's really a play designed for Traivonne, I just run the route hard and was open and Pete hit me of course," Mallory said about the play intended for teammate Traivonne Brown. "Pete just went through his progressions, saw that Traivonne was covered and just hit me."

Mt. Miguel was equally quick in responding. The team's quarterback, A.J. Stanford, completed passes to Bryant Mitchell for seven yards, Willie Morales for 54 yards and Mitchell again for 11 yards on consecutive plays. The passing flurry put the Matadors on the Norsemen's 8-yard line. Three plays later, Hunter scored on a  one-yard run to tie the game at seven. 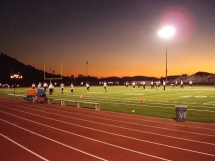 The Matadors' success on offense carried over to their defense, which forced the Norsemen to go three-and-out on their next drive. Mt. Miguel then went on a nine-play 67 yard drive that resulted in another touchdown run by Hunter, this time from three yards out, to put the Matadors up 14-7.

On Valhalla's next drive, Mt. Miguel's defense did not have to work as hard. Christian Henry recovered a fumble by Thomas and returned it 28 yards for a touchdown to put the Matadors up 21-7. Handling the ball cleanly had been a challenge for the Norsemen as bad snaps and fumbles occurred several times previously.

Also challenging for the Norsemen was finding a way to get back in the game. Late in the second quarter they went on an extended drive that took 13 plays, only to have to settle for a 27-yard field goal by Nicholas Giandoni. As a result, the score was 21-10, Mt. Miguel at halftime.

The halftime intermission is an opportunity for teams to make adjustments. The only question is what form the adjustment comes in. Some intermissions can be inspiring, while others would make R. Lee Ermey blush. Whatever went on in the Norsemen's locker room at halftime worked, because in the second half, they came out rejuvenated.

"We always knew we could get some plays together and put a good drive together, it was just little mistakes that we kept doing that kinda hurt us, but once we put together a solid drive, we got things rolling," Mallory said about the second half.

Valhalla's Hansell Wilson returned the opening kick of the second half 53 yards to give the Norsemen great field position, starting on the Matadors' 42-yard line. Four plays later, Brown ran the ball in from 3 yards to close Mt. Miguel's lead to five, 21-16. 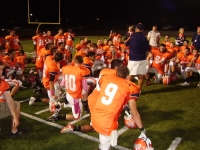 The following kickoff by Valhalla pinned Mt. Miguel deep in its own territory as they started their next drive on their own 14-yard line. Although Stanford completed a pass to Morales for 14 yards, the gains made by that play were later negated by a holding penalty and the Matadors were forced to punt.

Leighton continued to make big returns to give Valhalla great field position. He returned the next punt from Ibarra 11 yards to Mt. Miguel's 38-yard line. The Norsemen offense had to work harder on this drive as they took 10 plays to score. Thomas ran the ball in from one yard out to extend Valhalla's lead to 29-21.

For the second straight time, Mt. Miguel was forced into a three-and-out as a result of great defensive play by the Norsemen. Greg Goulding sacked Stanford for an eight yard loss, forcing the Matadors into another punting situation.

Once again Leighton contributed in a huge way by catching a 27-yard touchdown pass from Thomas to make the score 36-21, Norsemen. Valhalla seemed to be in control, but Mt. Miguel would soon demonstrate this game was far from over.

"I underthrew that ball, but he just made an awesome catch," Thomas said about the touchdown play to Leighton.

Hunter carried the bulk of the load on Mt. Miguel's next drive by carrying the ball eight times for 47 yards, including a one-yard touchdown run. He caught a pass from Stanford to successfully complete the two-point conversion, and the Matadors were within one touchdown of tying the game, trailing 36-29.

On the ensuing kickoff, Valhalla recovered Mt. Miguel's onside kick attempt and had great field position at their own 41-yard line. However, the Matador defense toughened up and forced Valhalla to go three-and-out and punt.

With the ball on itsr own 22-yard line and 2:48 left in the game, Mt. Miguel had plenty of time to tie this game. Stanford and his receivers demonstrated the big play capability of the Matadors' offense on their first drive of the game. Everyone in attendance, whether fearful or admiring of this capability was on the edge of their seat for the next series of plays.

Valhalla's field is a far cry from Tiger Stadium in Baton Rouge during an LSU-Florida game, but still became loud on the home side as fans yelled their lungs out, stomped bleachers and did whatever else they could to try to make calling signals difficult for Stanford. It enhanced the drama that the game itself created.

Stanford did not seem one bit fazed by the increased decibel level or a holding penalty by his team as he completed passes of 21 and 10 yards to Tyler Miller, advancing the ball to near midfield, at Mt. Miguel's 47-yard line. There was still ample time for the Matadors to cover the 53 yards needed for them to tie the game.

Out of nervousness and the hope that it would help, the home team fans stomped and yelled more loudly. What probably contributed more to the Norsemen's success, however was the play of their defense. A screen pass from Stanford to Miller was read well by the defense as Miller was tackled immediately for a three-yard loss. Stanford was sacked for a five-yard loss on the next play as Mt. Miguel continued movement in the wrong direction.

Although Valhalla's defense gained some momentum on the previous two plays and had backed Mt. Miguel into a fourth-and-18 at its own 39-yard line, they still had to make one more play. Mt. Miguel was certainly in a difficult situation, but had the personnel capable of making 18 yards or more on the next play to keep their drive alive.

In the end, it was Valhalla's defense that prevailed. Anthony Toma and David Bell were in the Matadors' backfield, giving Stanford no time to pass and sacking the Matador quarterback for a nine-yard loss. The Norsemen took over on downs and killed the clock with a couple of kneel-downs to seal a 36-29 victory.

"Execution was a big thing, during the first half we just weren't executing, a lot of stupid mistakes that we just needed to click on, nobody's fault really, just needed to get fired up, " said Leighton about the overall game.

Both teams now have 4-2 records and continue their Grossmont South league schedule with games in Spring Valley. Mt. Miguel comes home to face the Granite Hills Eagles (3-3), while Valhalla travels to Monte Vista to take on the Monarchs (1-5).