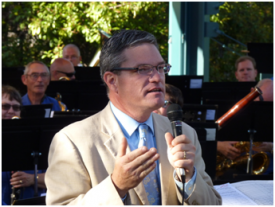 November 7, 2015 (El Cajon)--The Water Conservation Garden today announced the departure of John Bolthouse, who has served as the organization’s Executive Director since February 2012. The Garden’s board of directors extends its deepest gratitude for Bolthouse’s innumerable contributions to The Garden over the years.

“John has truly been a visionary for our organization, leading The Garden into a new era,” said The Garden Board of Directors President Elyssa Robertson. “His planning, forethought and efforts over the past 3 years have provided us with the framework and clear vision for The Garden’s continued success. On behalf of the board of directors and Garden staff, we wish John the absolute best for his next exciting venture.”

Bolthouse, who has more than 20 years experience working with non-profits, will be serving as the new Executive Director of the Friends of Balboa Park. His last day with The Garden will be December 18, until which he will assist the Board with the search for his successor. An executive search committee has been formed to begin that process.

“I am extremely proud of what The Garden accomplished during my tenure,” said Bolthouse. “Thanks to the dedication and support of the board of directors, volunteer corps, professional staff, and The Garden’s supporters, we’ve been able to shepherd this great organization through some of its most transformative years, setting a course for a promising future. I will always look fondly upon this time in my career and will remain a strong Garden supporter and advocate.”

The Water Conservation Garden is a 6-acre demonstration garden that showcases Southern California landscapes using water-wise and drought-tolerant plants. Opened in 1999, the Garden is a 501(c)(3) non-profit organization dedicated to promoting water conservation in the landscape, and the sustainable use of related natural resources, through excellent exhibits and programs that educate and inspire the public. The Garden is supported in part by member water agencies, garden partnerships and private donations. For more information, visit www.thegarden.org.