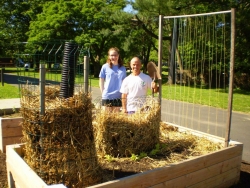 May 10, 2010 (New Jersey) -- Imagine switching compost bins instead of sides on the tennis court? Planting vegetables in place of goals in the net. That’s exactly what Princeton High School kids in New Jersey are doing. In an elective program, they can choose to take Gardening in place of traditional PE classes.

Matt Wilkinson, a P.E. educator at Princeton High School, is challenging people to think of the movement of a person’s body outside of traditional ideals. He wants people to redefine what it means to be physically active and think outside the box. Best part: The students love it. Students in the program started a blog on their own, where they comment on the experiences they are having in the program. The students enjoy the fact that every day is different. In traditional P.E. classes you do six weeks of tennis; in the gardening program you are turning compost on Monday and planting on Tuesday. 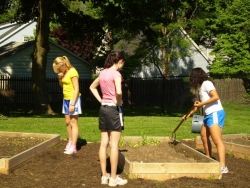 Kids like to be stimulated and the gardening program is doing just that, with an activity they can take with them for life. Wilkinson is quick to note that the program is not for everyone, especially kids who want competition in gym class, but it’s “a valuable supplement, not a replacement for traditional P.E.”

It’s often said that one person can make a difference, and Mr. Wilkinson is proving that. A graduate of Perdue University, he has always been fascinated by agriculture education. However when the program kept being dropped, he switched to physical education. He came up with the idea for Lifetime Fitness to include gardening when he noticed a block of buildings weren’t being used. He approached his principle with the idea, and within days the idea not only took hold, it took flight. Fifteen hundred dollars was raised in four days to get the program running. Local business and gardening groups got excited and contributed money.

Mr. Wilkinson seems uneasy in the spotlight, noting he’s benefitting the most by seeing the kids get excited about gardening. He doesn’t take credit for the program either, saying he only lit the match. Individuals in the community made this happen. Carla Cook, a food writer, and Pam Flory, a gardening advocate, pushed the idea into reality. “People will want to get involved,” he explains, encouraging other communities to find gardening advocates in their area. Even he is amazed that the program has garnered such interest and it’s taken on a life of its own.

Wilkinson is right. People will want to get involved. What’s needed are more instructors like Wilkonson, pitching their ideas and thinking outside the box. Or, in this case in the box-- the gardening box.