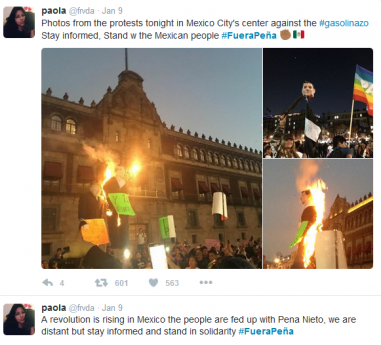 January 10, 2017 (San Diego) –  Protests have erupted across Mexico over a 20 percent hike in gas prices due to deregulation ordered by President Peña Nieto. Though cost of a gallon of gasoline is now about $3.50-- nearly as much as a day’s wages (about $4 at a minimum wage job), fueling outrage among impoverished Mexicans.

The protests began January 1st and have impacted dozens of cities as a nationwide strike has been called, with participants using the Twitter hashtag #gasolinazo and #fueropeña to organize.

A Twitter user identified as Paola wrote yesterday, “A revolution is rising in Mexico” and urged solidarity.  He posted photos of crowds in Mexico City, where thousands turned out and burned an image of the Mexican president in effigy.

Over the weekend, the San Ysidro border crossing was closed to northbound traffic due to a blockade.   Traffic was diverted to the Otay Mesa crossing, which remained open.

In Tijuana, gas stations have been shut down due to blockades of Pemex supply centers, the government-run oil company.  Due to the gas shortage, Mexicans with immigrant status or dual citizenship have been crossing into the U.S. to fill their tanks in San Diego County. Stores and businesses have shut down in some areas.

Clashes have turned violent. Over the past week, a police officer and pedestrian were killed in looting incidents linked to the gas price protests.  In Rosarito, a protester drove a pickup truck into a line of riot police, injuring seven officers.  Nationwide, since the protests began, Mexican officials have estimated over 1,500 people have been detained.

Photos on Twitter taken yesterday show protests continuing in Mexico City, where thousands took to the streets, burning an effigy of Peña and calling for his resignation.

With gas running scarce, some Mexicans opened their cars to share rides with strangers.

Nieto has said the gas price hikes are needed to eliminate fuel subsidies and bring prices in line with international rates.   Other energy reforms are opening the door to private investment to end the state’s monopoly on energy, but instead of lowering prices after competitive stations began opening, prices are continuing to rise.  Later in the year, companies will be allowed to import and distribute gas in Mexico.

Mexico’s president has said that “Keeping gas prices artificially low would mean taking money away from the poorest Mexicans, and giving it to those who have the most.”

But to Mexican people who cannot afford to feed their families, pay rent and fill their gas tank, the new policies seem to be hurting the very people Nieto claimed to want to help.

If you’re considering crossing the border into Mexico before protests subside, it’s advisable to check the 511 San Diego region website. for the latest updates on traffic in the border region.