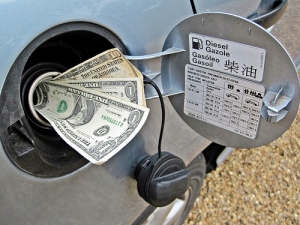 November 29, 2017 (San Diego) — A statewide gas tax hike that took effect November 1st under Senate Bill 1 raised gas excise taxes by 12 cents a gallon, also hiking up diesel fuel rates. An increase in vehicle registration fees is also slated to go into effect in January. The money is to be used to fix roads, highways and bridges as well as improving public transit.

But now a Republican-led political action committee called Reform California has launched an effort to repeal Senate Bill 1.  They are trying to get 600,000 signatures needed to get the measure onto the statewide ballot next year.

Carl DeMaio, a former San Diego Councilman, is chair of Reform California. He says state legislators “crossed the line with these massive car and gas tax hikes and we intend to give taxpayers the chance to reverse that decision with this initiative.”

But a coalition called Fix Our Roads includes businesses, labor and transportation groups that support the increased taxes.

According to a statement issued by the Fix Our Roads coalition, "California drivers will have safer, less congested roads thanks to SB 1. Every single community in California will receive funding to make road safety improvements, fill potholes, and repair local streets, freeways, bridges and overpasses,” the group notes, adding that SB 1 comes with strict accountability requirements to assure that the funds will be used only for transportation.

Roads in California won't be less congested.
And "Every single community...", that's a lot of cities, towns, and small isolated places.