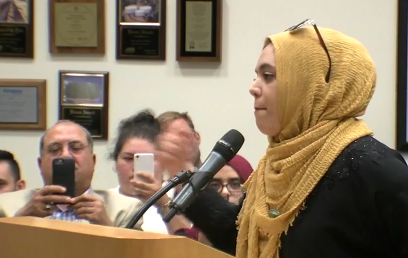 March 2, 2017 (Spring Valley) – Ratepayers held a protest at yesterday’s Otay Water District meeting, calling on director Hector Gastelum to resign or face a recall election due to anti-Muslim statements that he posted on Twitter.

One of his tweets called for bringing pressure on legislators to “prevent #subhuman #scum” from coming to the U.S., a reference to President Donald Trump’s ban on immigrants from Muslim nations, which was blocked by both trial and appellate courts.

Another of Gastelum’s tweets read, “This is how the left learns #Muslim #Islam #Sharia aren’t compatible with any form of #civilsociety #equality.”

Hanif Mohebi, executive director of the Council on American-Islamic Relations, told NBC 7 that there is a “pattern” of Gastelum “projecting Islamophobic, anti-Muslim rhetoric.”

Last week, Gastelum told 10 News that his comments were not meant to target all Muslims, but specifically those “gang-raping women, stoning them to death throwing homosexuals from the roof.”  He said he believes people are “hypersensitive” and that he did not meant o be hurtful.

During this week’s public meeting, the crowd booed when Gastelum started to speak.  He apologized for his tweets, which he has removed, but then said he was not referring to “good Muslims” adding, “When women get treated like second-hand citizens it makes me insane,” before audience chants of “resign” drowned out his words.

The board adopted a resolution condemning discriminating and prohibiting board members and employees of the district from making any public oral or written statements that are discriminatory based on race, color, religion, ethnicity, national origin, place of birth, ancestry, native language or accent, citizenship, gender, sex, gender identity, sexual orientation, age, familial status, physical or mental disability, or other legally protected status recognized by federal, state or local laws.

After the meeting, Gastelum told 10 News that he will not resign.

The board has no power to remove Gastelum from office; only voters can do that.

If ratepayers succeed in getting enough signatures to force a special election for voters to decide if Gastelum could be recalled, that would be costly for ratepayers, who would foot the bill.   But leaving a public official in office who has voiced views perceived by many constituents as religious hate speech can also be costly in the court of public opinion and in the impact on community members.

calling him names doesn't solve anything and is a personal attack against Gastelum.
cair is quoted in the article, they are an anti Semitic, anti Israel, pro sharia organization and are indeed a terror supporting group. don't like what Mr Gastelum said, fine, otherwise I agree we do have lots of bigots around

cair has known ties to terror groups. this guy has done nothing wrong, nor is what he said false. attack him rather than seek the truth regarding his accusations which are on video.

this is about one of the bigots among us, just one of many.