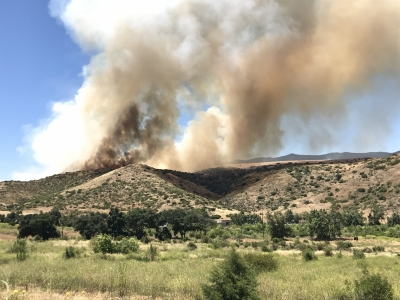 Update 4:50 p.m.:   Fire is now 500 acres and still only 5% contained. A Chula Vista policeman directing traffic was struck by a vehicle and has been taken to a hospital with non-life threatening injuries.

May 20, 2017 (Jamul/Otay) – The Gate Fire has scorched 300 to 400 acres,  according to Cal-Fire.  Thus far no structures have been damaged.  The fire is burning  near Highway 94 and Otay Lakes Road, toward the Rancho Jamul Reserve with winds at 10-15 miles per hour.  The fire is zero percent contained and still spreading rapidly.

Mandatory evacuations have been issued for the Thousand Trails Pio Pico campground, Cal Fire confirms.  The Deerhorn Valley Antler reports that the Dulzura area is preparing for possible evacuation. Concerns have also been raised about hikers  behind Pio Pico who left to go hiking shortly before the blaze broke out.

Highway 94 is shut down from the Dulzura Café to State Route 188. Otay Lakes Road is also closed, per the California Highway Patrol.  Traffic is heavy along 94 due to vehicles leaving the area. 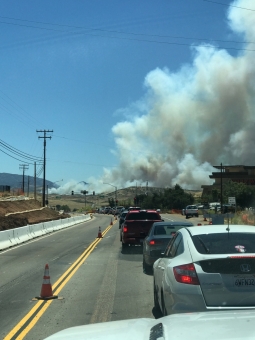 Donnie Durfee told East County Magazine that he believes the fire may have started at the “Pink Gate” shooting range before spreading west toward the Pio Pico campground.

“I drove by the shooting range heading west on 94 about 10 minutes before the fire started. There were about 10 cars with people target shooting,” he says. “My wife and I were commenting on how every year fires get started at this location before the BLM shuts it down. Dry grass that is waist high and target shooting don't combine well. I was able to get back to my home in Dulzura after the fire started and could see the target shooting area is now burned with the fire headed west towards Pio Pico. The shooting range is now the staging area for the fire fighters.”

Traffic has backed up along 94 as motorists seek to leave the area.  (Photo, right, near Hollywood Jamul-San Diego Casino,  from @marsoderek of Valley Farm Market)

VIEWS FROM HPWREN ATOP LYONS PEAK

West camera has best view of fire and direction it's heading.

Sign up to receive free East County Wildfire and Emergency Alerts at the top right side of our homepage and you can also receive a free weekly newsletter from East County Magazine with top news and events .  You can also follow EastCountyAlert on Twitter to get free alerts on your mobile phone. We recommend all of the above, since you don't know what form of communication will work best in a major regional emergency. 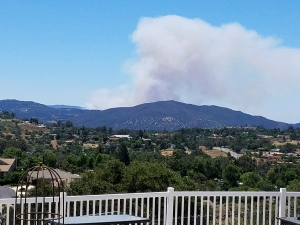