Over the next 40 years Alzheimer’s disease will cost the nation $20 trillion--enough to pay off the national debt and still send a $20,000 check to every man, woman and child in America. 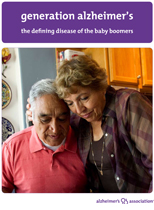 April 24, 2011 (San Diego’s East County) -- This year, the first wave of baby boomers are turning 65 – and with increased age comes increased risk of developing Alzheimer's disease. A new report, "Generation Alzheimer's: The Defining Disease of the Baby Boomers," sheds light on a crisis that is no longer emerging – but here.

"Alzheimer’s is a tragic epidemic that has no survivors. Not a single one," said Harry Johns, president and CEO of the Alzheimer’s Association. "It is as much a thief as a killer. Alzheimer’s will darken the long-awaited retirement years of the one out of eight baby boomers who will develop it. Those who will care for these loved ones will witness, day by day, the progressive and relentless realities of this fatal disease. But we can still change that if we act now."

According to the new Alzheimer’s Association report, "Generation Alzheimer’s," it is expected that 10 million baby boomers will either die with or from Alzheimer’s, the only cause of death among the top 10 in America without a way to prevent, cure or even slow its progression. But, while Alzheimer’s kills, it does so only after taking everything away, slowly stripping an individual’s autonomy and independence.

Even beyond the cruel impact Alzheimer’s has on the individuals with the disease, Generation Alzheimer’s also details the negative cascading effects the disease places on millions of caregivers. Caregivers and families go through the agony of losing a loved one twice: first to the ravaging effects of the disease and then, ultimately, to actual death.

"Most people survive an average of four to six years after a diagnosis of Alzheimer’s disease, but many can live as long as 20 years with the disease. As the disease progresses, the person with dementia requires more and more assistance with everyday tasks like bathing, dressing, eating and household activities," said Beth Kallmyer, senior director of Constituent Relations for the Alzheimer’s Association. "This long duration often places increasingly intensive care demands on the nearly 15 million family members and friends who provide unpaid care, and it negatively affects their health, employment, income and financial security."

In addition to the human toll, over the next 40 years Alzheimer’s disease will cost the nation $20 trillion, enough to pay off the national debt and still send a $20,000 check to every man, woman and child in America. And while every 69 seconds someone in America develops Alzheimer’s disease today, by 2050 someone will develop the disease every 33 seconds - unless the federal government commits to changing the Alzheimer’s trajectory.

"Alzheimer’s – with its broad ranging impact on individuals, families, Medicare and Medicaid - has the power to bring the country to its financial knees," said Robert J. Egge, vice president of Public Policy of the Alzheimer’s Association. "But when the federal government has been focused, committed and willing to put the necessary resources to work to confront a disease that poses a real public health threat to the nation – there has been great success. In order to see the day where Alzheimer’s is no longer a death sentence, we need to see that type of commitment with Alzheimer’s."

The full text of the Alzheimer’s Association’s "Generation Alzheimer’s" report can be viewed at www.alz.org/boomers.