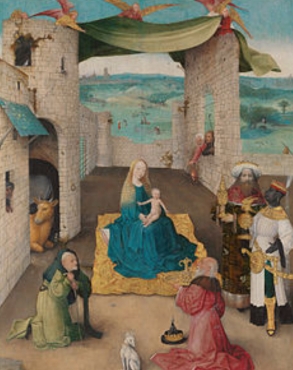 One-act Christmas opera in English; two performances only on December 22 at STAR Repertory Theatre in Escondido

November 20, 2018 (Escondido) - “Amahl and the Night Visitors,” a one-act Christmas opera in English written by Gian Carlo Menotti, will be presented at 2 p.m. and 7 p.m. on Saturday, December 22nd at the STAR Repertory Theatre, 329 E. Valley Parkway in Escondido.  The production by Genesis Opera Theatre features an all-star cast of talent drawn from Southern California’s San Diego, Los Angeles and Riverside Counties, and is directed by Cynthia Leigh with musical direction by Tim Leon.

“Amahl…” was commissioned by the NBC Network and first broadcast on television December 24, 1951 on the network’s “Hallmark Hall of Fame.”  It was inspired by “The Adoration of the Magi,” a painting hanging in New York’s Metropolitan Museum of Art.

Based on folk tales of the Nativity and Epiphany, “Amahl…” is a retelling of the story of the Magi from the point of view of a young disabled boy named Amahl, who lives in poverty with his poor widowed mother near Bethlehem.

Director Cynthia Leigh, who will also portray The Mother during the evening performance, says “This heartwarming story is a perfect introduction to opera for kids as well as adults.  It has been a sentimental favorite of mine for years and I‘m thrilled to be able to share it with new audiences and seasoned opera-goers alike.”

Genesis Opera Theatre’s mission is to make opera accessible to people of all ages for a reasonable price, and with the hope of inspiring young people to explore the art form further as participants or patrons.