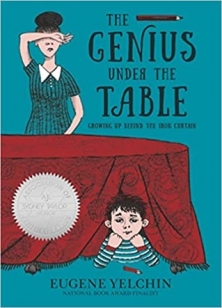 March 28, 2022 (San Diego) – The Genius Under the Table: Growing Up Behind the Iron Curtain was written by Eugene Yelchin, who is a member of the San Diego Society for Children’s Book Writers and Illustrators. The topic is relevant at a time when Russia has launched a war in Europe threatening freedom of neighboring Ukraine, rekindling memories of the iron curtain, an invisible barrier which separated free nations from others in Europe until the Soviet Union collapsed.

In Leningrad, Russia, Yevgeny grows up in an apartment. Except for the kitchen and bathroom, each room is occupied by a separate family. One room has a government spy. Every apartment is like this.

The boy’s family sleeps in the dining room. Yevgeny’s make-shift bed fits under the table, which is covered to the floor by a cloth. Yevgeny enjoys a feeling of privacy though his brother, grandmother and parents are also in the room. Each night, Yevgeny steals his father’s only pencil and draws pictures on the bottom of the table.

Having artistic talent can earn a person an independent apartment and even a car. Some get to travel to other countries too. Yevgeny’s older brother is one of the lucky ones. He’s a gifted athlete who becomes a figure skater.

For the most part, being Jewish (yid) puts family members at a disadvantage in a country where antisemitism is prevalent. Yevgeny’s mother was a gifted ballerina, but her career was aborted because of her heritage. Nevertheless, she is desperate to uncover a latent talent in her younger son, even when he expresses interest in ballet.

Being young, Yevgeny often asks awkward questions that his parents cannot openly answer. But they never take him off to have private discussions. Instead, the boy’s mother and father seem unable to actually state the truth. They start to speak, but get confused then become silent.

The events told should be painful and infuriating, but Yelchin somehow makes them seem absurd and often humorous through illustrations by Yevgeny.

This memoir is a great read for age ten up to adults.