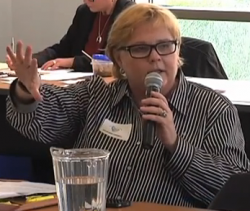 May 28, 2013 (San Diego)--A wide range of facets and perspectives of the growing “green energy” industry were shared at a special forum titled “New San Diego Green Leaders: The Road To 100% Renewables” on May 7th at Cricket Communications headquarters in Kearney Mesa.  Kathleen Connell moderated the forum sponsored by Green Experts Academy; East County Magazine was media sponsor of the event.

The forum addressed how San Diego might utilize 100 percent renewable energy, also focusing on how local leaders can learn from Germany and other countries where development of alternative renewable energy sources is not an option, but a necessity.

The forum was led off by Peter Vogel, Executive Vice President of Wirsol Solar Canada, a German-based corporation which has become an active worldwide financer and developer of solar energy.  It has installed over seven thousand solar systems around the world, from rooftop systems to large solar photo voltaic arrays. 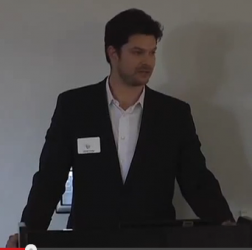 Germany now produces over 28 billion kilowatt hours from solar which in summer 2012 produced more than 60 percent of its power from PV solar. Vogel presented statistics to show how Germany’s  solar energy growth has been fueled by the German government’s successful incentive programs including feed-in tariffs. "Everyone can connect PV to the grid and get a guaranteed revenue from that," he emphasized. Costs are responsiblities of the generator, not the government or ratepayers.

Germany has also encouraged solar through a program to put solar on 100,000 rooftops, with incentives for installing German-made solar PVs. In addition, renewables are given priority for connection to the grid over non-renewable energy sources.

He said that Germany has emphasized rooftop solar systems, particularly commercial rooftop, as opposed to the United States where there has been more emphasis on large solar projects developed by utilities (due to availability of larger undeveloped land masses in the U.S. versus Germany’s highly urbanized areas).

“There is  a tremendously underserved rooftop market in the U.S.,” he said, noting that Germany has learned that large-scale solar and wind has resulted in environmental issues. He further emphasized that the previously used models of “distributed energy” by electric utilities for the past 100 years is less economical than the utilization of rooftop systems.

Vogel said that Wirsol’s systems have diverted 180,000 tons of Carbon Dioxide from being spewed into the atmosphere. Wirsol is presently negotiating wit the City of San Diego to bring its photo voltaic systems to city-owned buildings.

Scott Gayes, a professional recruiter for Adecco (a staffing and recruiting business) revealed to the participants at the workshop that so-called “green jobs” are growing in number at a faster pace than traditional jobs. He emphasized the need for those interested in being part of the industry to follow tried-and-true means of seeking employment such as networking and to be accurate in citing work experience and accomplishments to both recruiters and potential employers.

“We are making more strides to work closer with the city of San Diego to make this happen,” Roberts said. “Instead of taking the approach of working as a city of 1.2 million, we need to step back and work on these goals as a county of 3.4 million people.”

“Our emphasis is to bring solar energy to the most obvious buildings where solar can be utilized,” Mayor Filner said. He added that he is spearheading efforts to also harness bio-fuels and the ocean in what he called an “aqua” strategy combining “green” (alternative energy) and “blue” (ocean) approach to energy production.

Kevin Beiser, Vice-President of the San Diego Unified School Board, discussed how he has tried to present all-encompassing proposals towards bringing renewable energy and resource management in a holistic fashion.  He has directed efforts to eliminate use of Styrofoam lunch trays throughout the school district and has suggested making school lunch menus “meatless” one day a week. “

“Everything we have implemented in terms of pro-environmental or green has ended up saving the district’s bottom line,” said Beiser. He expressed disappointment that the district has had to curtail installing solar panels on its school buildings due to California Department of Education recently enacted protocols.  Those protocols  now require any solar project to be a part of new building construction rather than a function of building retrofitting.  This has led the San Diego Unified School District to now place its solar projects throughout the district on existing carports.