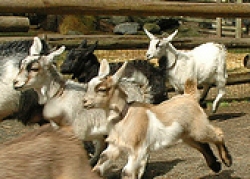 It’s now legal to own up to 25 chickens (roosters are still banned, sparing neighbors those early morning wake-up calls). You can raise miniature goats for personal consumption of goat’s milk and cheese. In addition, up to two beehives per household are allowed for honey production.

There are some restrictions such as property line setbacks, height of enclosures, and rules requiring ample space per animal to assure humane treatment. See details here: http://www.sandiegoroots.org/resources/SD-Urban-Ag-Plan-Summary.pdf

The ordinance also makes it easier for local farmers to sell items at stands or farmer’s markets. Community gardens in residential zones are also allowed to sell produce consistent with regulations for garage sales.

The measure was spurred by a $50,000 grant that the City received last year to promote healthier living and urban agriculture, trends that aim to combat obesity and disease such as diabetes that have been linked to eating junk food.

Interest in urban agriculture has been on the rise, buoyed by groups such as San Diego roots, which helps people start up backyard gardens, as well as a growing number of community gardens, school gardens, and community supported agriculture programs to help urban dwellers rediscover their rural “roots.”