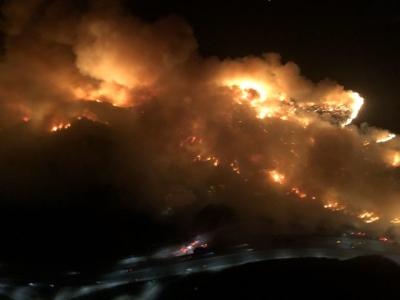 October 28, 2019 (Los Angeles) – The fast-moving #GettyFire that erupted overnight near the famous Getty art museum has shut down the 405 freeway in Los Angeles.  Several homes have burned and thousands are threatened. Mandatory evacuations have been issued as far south as Pacific Palisades, affecting 10,000 commercial and residential structures as well as the University of California, Davis campus, CBS 8 reports.

Fire officials described the evacuation zone s a box bounded by Mulholland Drive on the north side, the 405 on the east, Sunset Boulevard on the south and Temescal Canyon Road on the west. A broader evacuation warning area extends north to Topanga and west to Malibu.

Many of the impacted areas are without power, further impeding evacuations amid already chaotic conditions making morning rush hour a nightmare.

"Be calm, but get out," Mayor Eric Garcetti advised residents today.