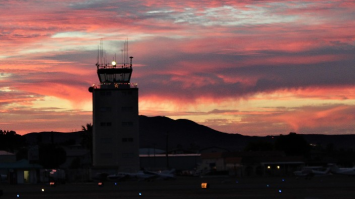 January 28, 2016 (El Cajon)--A plan to expand operations at Gillespie Field and develop a 70-acre site once occupied by the El Cajon Speedway was put in a holding pattern because of a lack of federal funding.

Earlier this month, board members from the Gillespie Field Development Council, a five-member board that oversees the county-owned airport, heard that expected federal grant funding to finance the estimated $30 million project wasn’t available.

The project called Cajon Air Center has received some $5.6 from the Federal Aviation Administration to start the work. But according to a new timetable given to the board at its Jan. 20 meeting, construction of the first hangers at the site wouldn’t begin until 2021, and the final phase won’t happen until 2022.

“What happened?,” asked Phyllis Trombi, vice chairwoman of GFDC, to the airport’s staff. “We’re talking five more years before we can build a hanger.”

Michael Khoury, a project manager with the county’s public works department, told the board that the FAA grant funding they had expected to get wasn’t provided.

“The biggest challenge for this project is the funding availability,” Khoury said. The FAA simply doesn’t have the money for the project at this time, the board was told.

Peter Drinkwater, director of airports for the county, advised the board it could move ahead with the first phase of the Cajon Air Center project despite not having all the needed money.

The first phase entails building a water detention basin that would support an apron for transient aircraft parking. Sufficient funding exists to complete the first phase, he said. Airport manager Marc Baskel said the FAA grant the airport has already secured is for $5.58 million.

Barry Bardack, the board chairman, echoed Trombi’s frustration about the delays in FAA funding has set the project back. “We’ve been watching this land sit for 10 years without (generating) the income that it could be bringing us,” he said.

“This is just amazing and aggravating...It’s sad to see the federal government move so slowly,” said Trombi, who continued to press airport staff on what alternative strategies might be used to accelerate the project.

When the county’s Board of Supervisors approved the Cajon Air Center in 2012, the plan called for the selection of a private developer by 2015, and for construction to begin this month.

Since the County ended the lease of the property to the El Cajon Speedway in August of 2005, plans were set in place to build the infrastructure that would attract private investment and turn the site into one that houses mainly aviation-related manufacturing and service businesses. A 2012 study estimated the center could result in an increase of more than 3,000 jobs at the site, and by 2025, more than 4,000 new jobs.

However, some local residents in and around Gillespie Field are adamantly opposed to the expansion, saying it would increase the number of flights, and along with that, increase noise and air pollution. 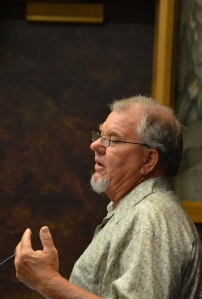 Robert Germann, the founder of CAGE or Citizens Against Gillespie Expansion, spoke at the last board meeting, and cited a number of problems with the county’s plan. He was particularly critical of the increase in student flight training by schools at Gillespie Field.

The majority of these students aren’t training for small planes but are really employees for large international airlines, and obtaining their first lessons towards getting a commercial pilot’s license, Germann said in a subsequent interview with ECM.

“The Cajon Air Center is really a state-of-the-art flight training center for international students,” he said. “The airport is desperate. They’re trying to promote Gillespie Field in an environment when aviation has a 20-year history of declining.”

Many of the foreign students don’t speak English well and present a real safety hazard when they’re flying due to their inability to communicate effectively with the tower, he said.

The increased touch-and-go training flights at Gillespie have angered local residents who say the flight patterns are much lower than regular private plane flights, and causing ongoing noise pollution.

Sue Strom, a steering committee member for ASAP, Advocates for Safe Airport Policy and a resident of Fletcher Hills, said her group “embraces general aviation” but is adamantly opposed to what the plans, which appears to be an international flight training center.

“We feel the quality of our lives are being affected,” Strom said. “This is also affecting the values of our houses, and this is something that we’ve been saying for three years.”

Strom said her group met with Supervisor Dianne Jacob in November to see if they could get some relief from the many fly-overs, but so far nothing’s changed.

Just putting in place some basic rules such as following curfews and flight patterns would be an improvement, she said.

“We’re calling for the curtailment of student flight training over our houses, and the implementation of enforceable rules,” Strom said.

Germann, a Lakeside resident who says his group numbers about 100 people, says airport officials haven’t been forthcoming about what has become a thriving business at Gillespie, and how they intend to expand that.

“What they’re doing here is really creating ‘rating factories,’ or providing the necessary initial flight training for foreign pilots so they can qualify to become commercial airline pilots on foreign carriers,” Germann said.

Germann, who has been opposing the project for some five years, said airport officials are hiding aspects of the project’s plan, including the building of a fuel tank just outside the airport to handle the anticipated higher fuel demands. He pointed to a new fuel tank located at the operations center of Helix Water District as evidence.

Mike Urhammer, spokesman for Helix Water, said the two above ground fuel tanks at the district’s yard at 1233 Vernon Way “have no connection at all to Gillespie Field.”

One of the tanks was moved from another Helix location, giving the district more latitude in case of a disaster, Urhammer said. One tank holds unleaded fuel, the other diesel. If there is a power outage, the district would have the ability to fill its trucks with gas and enable workers to service its water lines and its customers, he said.

“There is no agreement of any kind with Gillespie Field, other businesses or developers for current or future use of the fuel from Helix’s tanks,” Urhammer said.