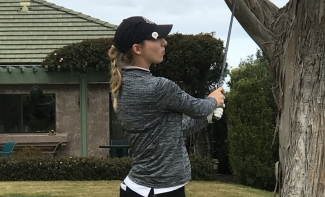 March 17, 2018 (Puerto Vallarta, Mexico) - San Diego State women’s golfer Gioia Carpinelli (Boppelsen, Switzerland) posted her highest placement of the season on Saturday, tying for second place at the Hawkeye-El Tigre Invitational after carding a 5-over-par 77 during the final round at El Tigre Golf and Country Club.

With her score, the Aztec freshman completed the tournament with a 54-hole total of even-par 216, landing in a four-way tie for the runner-up spot alongside Darian Zachek of New Mexico, Lexi Harkins of Wisconsin and Medy Thavong of Kennesaw State.

Carpinelli was 1-under through 10 holes after logging nine pars to go with a birdie at the par-5, 481-yard No. 4. However, six bogeys on the back nine knocked her out of contention, as Arizona’s Haley Moore, who was one of only two golfers in the 78-player field to break par Saturday with a final-round 70, vaulted to the top of the leaderboard and claimed medalist honors.

Sara Kjellker (Hollviken, Sweden) was SDSU’s No. 2 finisher, climbing five notches into a tie for 27th with a 10-over 226 despite shooting a final-round 75. The Aztec freshman was 4-over for the day through 12 holes after notching five bogeys against one birdie, but closed with a rush, notching four straight pars followed by a birdie on the par-5, 526-yard No. 18.

On the flip side, Mila Chaves (Asuncion, Paraguay) dropped from the 12th spot into a tie for 36th at 13-over 229 after stumbling to an 83. The SDSU senior endured a disastrous front nine that included four double-bogeys before sinking birdies on a pair of par 5s at No. 10 and No. 14.

Fellow classmate Haleigh Krause (Eugene, Ore.) notched the Aztecs round of the day with a 74, highlighted by three birdies, including back-to-back conversions on the fifth and sixth greens. With her round, the native Oregonian climbed 19 places into a tie for 47th at 16-over 232.

Elsewhere, senior Georgia Lacey (Del Mar, Calif.) led the Scarlet and Black with 14 pars on Saturday, but had to settle for a 78 thanks to a pair of bogeys and two doubles. As a result, the Torrey Pines alumna, slipped into a tie for 50th at 17-over 233.

Rounding out the SDSU delegation was Fernanda Escauriza (Asunción, Paraguay), an individual competitor who tumbled nine places into a tie for 20th with a 9-over 225 after shooting a 79 over the final 18 holes. The Aztec sophomore suffered a dubious start with a quadruple-bogey on the par-4 No. 1 and made just two birdies on the day.

San Diego State will have nine days to prepare for its lone home tournament of the season, the aptly named SDSU March Mayhem match-play event slated for March 26-28 at the Farms Golf Club in Rancho Santa Fe, Calif.