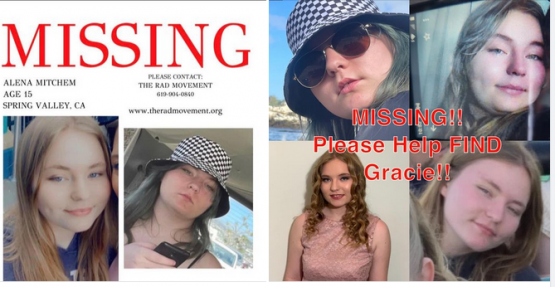 Photos:f Alena Mitchem, known as Gracie; her hair  was dyed green when she was last seen

September 29, 2022 (Spring Valley) – The family of 15-year-old Alena “Gracie” Mitchem is asking for public help to find her. She has been missing form her Spring Valley home since late at night on September 22.  Gracie has green eyes and brown hair, but her hair was dyed green when she was last seen, according to a listing on the National Center for Missing and Exploited Children website. She is 5 feet 4 inches tall and weighs about 155 pounds. (Note, some flyers had a misspelling. Her first name is Alena.)

Her sister, Aleena Christine Jones, posted on Facebook, “We believe she was lured out by someone online via the PlayStation platform...She took important documents that no child would think of…She’s had zero contact with anyone since her disappearance, no social media presence whatsoever… We have to bring her home.… Gracie we love you so much.”

Gracie’s mother, Shannon Hoffman, believes her daughter was lured by an adult. She is frustrated with the Sheriff’s initial response treating the matter as a runaway case, and by the lack of media notification, but added that detectives are now checking into the Playstation contacts. “As a mother, I know deep down something is wrong,” she posted, adding that she suspects someone enticed Gracie with a promise of a job, since the family has struggled financially.

“I’ve never wanted to ask for help But I am desperate now.," Hoffman wrote. She is asking the public to share photos of her daughter to help bring her home.