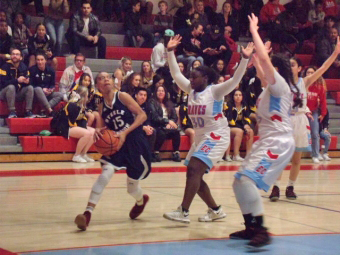 Story and photos by Liz Alper
January 18, 2019 (El Cajon) - El Cajon Valley and Steele Canyon girls basketball met on Braves wood for a Friday night contest between two evenly-matched teams.  The Lady Braves are faring astonishingly well at 12-5 overall coming into tonight.  The Cougars are hanging in there at 7-8.  Both were .500 in league (2-2) coming into tonight. 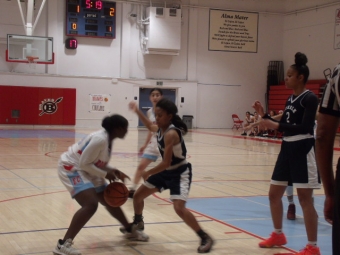 The first quarter was ruled by turnovers and very little scoring.  Steele got on the board first, but a long while later, Braves junior Vean Gorgees hit a crucial three that put the Braves up by two.  Cougars sophomore Mahkaylah Cline tied the game with a pair of free throws, but junior Tarry Flournoy made a breakaway with a nice layup for the finish at the other end and the Braves held onto a slim 7-6 lead after one.

The second quarter was the same; a story of turnovers and fouls, but Steele Canyon did snag a one-point lead on a big three-pointer, but El Cajon Valley fought hard and drew fouls to get to the line.  Senior Lilian Akintonde’s free throw tied the game and one from sophomore Silvia Aboud gave the Braves back their one-point lead.  Steele took it right back on a jump shot and free throw by Cline.  At the end of the half, though, the Cougars were able to widen the gap a bit thanks to turnovers and breakaways and good looks at the basket, but the Braves prevailed.  A 7-0 run—four points from freshman Kamika Jameson, a layup from Gorgees and one free throw from Akintonde—put the Braves up by their biggest lead of the game, 19-14, at the half. 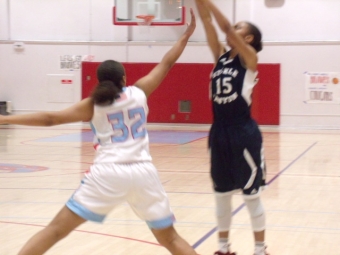 Neveen Qaryaqoos was ready for the second half.  The ball-jogging Braves senior immediately kicked off the third with her first points of the game, a long two, but Cougs senior Lala Wadley responded with an interception and a layup at the other end.  Wadley racked up five points as she tied up the game with a smooth, deep three.  But Kamika’s older sister Amiya, a junior, gave the Braves back a one-point lead with a good free throw shot.  ECVagain went to the fourth with a slim one-point lead, 22-21.
The Cougars decided to stop playing around in the fourth and kicked off the period with a monster three to go up by two.  Amiya Jameson tied up the game once more and Gorgees drew the foul to get to the line and put the Braves up by one.  As the game winded down, both teams seemed to find their energy and trade baskets, racing up and down the court.  It was Akintonde that delivered the dagger shot that put the Braves up by three, but Cline answered with two made free throws with 31.5 seconds left.  Two more free throws from Steele Canyon knotted up the game with one second left.  We were headed to overtime. 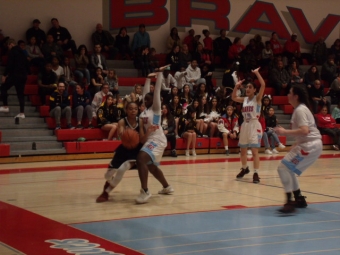 The Cougars weren’t going to make the same mistake twice in overtime. They hit free throws and drove to the hoop—including Cline’s big and-one—to get ahead.  But Akintonde stayed hot and kept the Braves close, but her one-woman show was no match for Wadley and Cline, who kept Steele out of reach and the Cougars overpowered the Braves to win a hard-fought game by both teams 41-33 and get to 8-8/.500 overall and 3-2 in league play.  The Braves fall to 12-6 and 2-3.
UP NEXT
The Braves get the weekend off before hosting Santana on Tuesday.  Tip-off is at 6:00 p.m.  The Lady Cougars stick around El Cajon on Tuesday, visiting Granite Hills.  Tip-off is at 6:00 p.m.
Like our high school basketball coverage?  Help us cover boys and girls basketball throughout the season by donating to East County Magazine Sports!
Follow @ECMagSports on Twitter for live in-game coverage and updates!
Does your son or daughter play a sport at a level other than varsity?  Comment on this story, tweet @ECMagSports, or email eastcountymagazinesports@gmail.com to request coverage!
Check out our sports section for more sports stories!