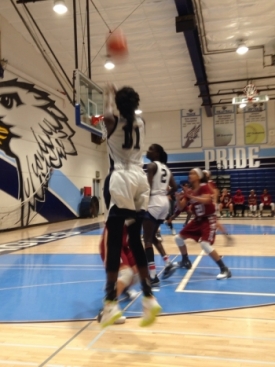 February 7, 2017 (El Cajon) - The Granite Hills Eagles girls’ basketball team are 1-4 in conference play and 8-11 overall.  Luckily for them, the Steele Canyon Lady Cougars have not won a single game in conference play; they are 0-7 against Grossmont League teams and 9-12 on the season.  The two squads faced off tonight.

Granite Hills got things started with two quick threes and when Steele Canyon crept back, they answered and kept up the pressure.  The Cougars were held to four points in the first quarter; the Eagles led 10-4. 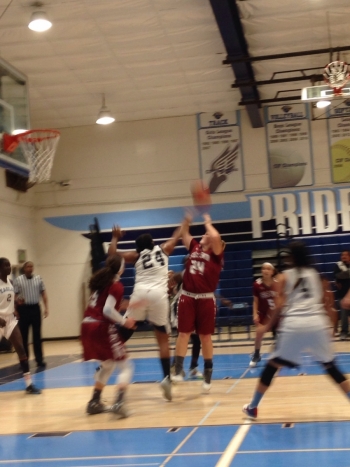 Steele Canyon picked up the pace in the second quarter thanks to seniors Makayla McCarthy and Marianna Martinez.  McCarthy had her and-one to make the score 10-7 and Martinez had a nice two in the paint to make the score 10-9, but Eagles senior Shanice Lacy’s two free throws kept Granite Hills up by one after two free throws by Martinez kept Steele Canyon in the game.  Lacy was unstoppable in the second, however, rebounding and scoring and helping Granite Hills stay out in front in the face of Steele Canyon’s added pressure.  She kept Granite Hills out in front by three at the half (despite the Eagles giving Steele Canyon lots of time at the charity stripe), 16-13.

The third quarter was a “let the kids play” type of quarter; it was the type of quarter that made you lose count of how many whistles there were in the first three minutes.  Granite Hills maintained and added to their lead, but at the end of the third, the Cougars utilized their fast break offense and tied the game at 19.  It was junior Elizabeth Bott who finally gave the Cougars their first lead of the game, charging to the hoop, getting the go ahead two and sending the Cougars to the final frame on a positive note, up 21-19. 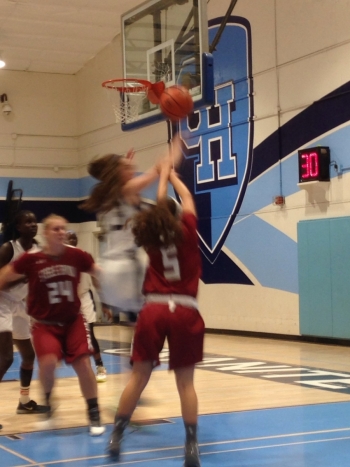 The refs still found themselves unable to put the whistle down in the fourth quarter, but their antics did send Granite Hills to the line for the game-tying bucket at 22.  That paved the way for junior Ayang Agoth to shoot a jumper that reclaimed a 24-22 lead for the Eagles with 4:24 left.  But the fast break offense of Steele Canyon tied the game yet again at 24.  Lacy once again sprang into action, getting to the hoop and putting the Eagles up 26-24, but that effort too was refuted by the Cougars.  Agoth charged to the other end of the floor and launched a three.  It went in and the Eagles jumped to a 29-26 lead with 1:13 left to play thanks to Miss Clutch yet again.  A free throw by junior Kani Kubari secured the win for the Eagles, who move to 2-4 in conference play (9-11 overall) with a 33-28 win.  The Cougars remain winless in conference play, moving to 0-8 and 9-13 on the season.

The Lady Eagles travel to Mount Miguel to battle the Matadors on Friday night.  Tipoff is at 5:30 p.m.  As for the Cougars, they’ll travel all the way out to Santee to take on the Wolf Pack of West Hills.  Tipoff is also at 5:30 p.m.