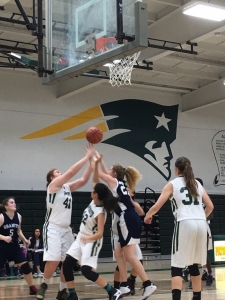 December 1, 2017 (San Diego) - What better way to kick off December than with high school sports? Football is winding down and we’re moving on to basketball.  Tonight, the lady Eagles of Granite Hills traveled to Patrick Henry to take on the Patriots in their first matchup of the season.  The Patriots are already 1-0 on the season. 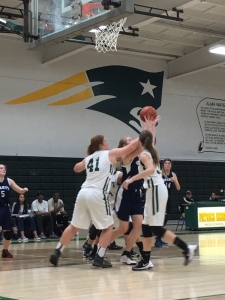 Both defenses came out hard and fast in the first quarter, with Granite taking an early lead. The Patriots found their way back, however, racking up turnovers and taking their first lead and expanding on it towards the end of the period, leading 13-6 after the first.

Though they had the lead, the lady Patriots kept up the pressure in the second, getting more physical with takeaways and steals.  But Granite Hills stayed in it.  Ayang Agoth, the tall, lanky senior, nailed a three and the tower the Patriots built in the first crumbled slowly.  They did get a free throw back and led 17-15 at the half.

The same pattern the first quarter followed showed up again in the third; an even defensive tilt with the Patriots finally breaking the ice with a monster three-pointer.  The Eagles stayed close behind and it was 34-29 Patriots after three. 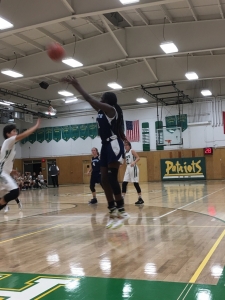 After some misses, the Patriots finally pulled away in the final frame with another crucial three.  Two big shots from beyond the arc were what got the Eagles to within three towards the end of the game, but the Patriots held on by the barrels of their muskets to win 46-39 and pick up their second win of the young season, while the Eagles pick up their first loss.

Tomorrow, the lady Eagles will take a trip to Ocotillo to face Imperial High.  Tipoff is at 3:00 p.m.  As for the Patriots, they’re back in action on Tuesday night against Bishop’s.  Tipoff is at 7:30 p.m.