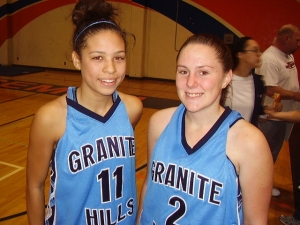 The key to the Eagles' defense was denying the Norsemen's inside game. Danielle Wilson, Valhalla's biggest inside threat, scored a game total of ten points, but only two of those points came in the second half.

With inside scoring taken away from them, Norsemen players were forced to shoot from the outside in the second half, but Eagles' defenders had that covered too, as the Norsemen's 11 points in the second half clearly demonstrates.

Granite Hills coach Jerry Parker praised his defense: "[The Norsemen] throw it inside a lot to Danielle Wilson, but then they can also shoot it from the three. I said 'Hey we've got to double her and get out to the shooters when she kicks it out', and I thought we did a pretty good job of that tonight."

Garner, who frequently shoots from outside the three-point line, finished with a total of 11 points was happy to have regained her shooting touch against Valhalla. "I've been off lately, so it was actually good that I actually made some lately."

Jessica Harris also contributed to the Eagles' win. She led all scorers with 13 points and shared her thoughts on what the key to her team's victory.

"Working as a team basically, because we've been down on ourselves and we haven't been doing so well, so we really had to pick it up, pump each other up and work as a team."

Garner seconded that thought: "We haven't been really working as a team, but we're coming back together and starting to pick each other up."

Granite Hills improves to 10-9 overall; 1-1 in league play with the win. Coach Parker underscored the importance of the win, which prevented his team from starting league play with an 0-2 record.

"Felt really good, it's a crosstown rival game, so it's always big to get a win against Valhalla. Al was a part of our coaching staff, he was a big part of our program for the last few years. It's a friendly rivalry, the girls get pumped up for it and it was a competitive game. I was just glad we were able to pull it out," said Parker, referring to Valhalla coach Al Silva.

Valhalla drops to 12-8 with the loss. They were led in scoring with Wilson, who had 10 points and MacKenzie Cartmill, who added nine points.