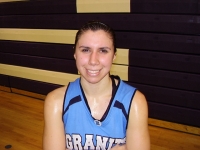 January 24, 2010 (Santee) - You cannot fault Santana High School's Lady Sultans basketball team for a lack of effort in last Tuesday night's game against the visiting Granite Hills Eagles. They overcame a huge deficit and came close to pulling off what would have been a monumental upset. In the end, effort wasn't enough to defeat a highly talented Granite Hills team as the Eagles squelched any hope of an upset late in the game, escaping with a 53-41 win.

The game got off to a quick start for Granite Hills. Sabrina Jimenez scored seven of the team's first nine points, while Alyssa Cannoff and Jessica Harris each added three-point field goals to help the Eagles take an 18-7 lead at the end of the first quarter.

Santana recovered from their slow start and began to chip away at Granite Hills' lead. In fact, the Lady Sultans actually outscored the Eagles 13-11 in the second quarter. Kim Gross scored three baskets from close range while Alyssa Padberg added a basket and converted all three attempts of a three-shot free throw just before halftime. The Eagles led 29-20 at the break, but were not as in control of the game as they had been in the previous quarter.

The third quarter was a more balanced effort for Santana. Five different players scored, and only one player, Delia Files, scored more than once. For the second straight quarter, the Lady Sultans outscored the Eagles, this time 12-11. At the end of the third quarter, the score was 40-32 in favor of Granite Hills.

Momentum shifted in a huge way for Santana in the fourth quarter. They pulled to within three with just 3:09 left, down 44-41. In the span of about one minute, Sammy White had connected on a three-point shot, the Eagles turned the ball over after an inopportune shot clock violation, then Santan's Haley Burton successfully completed a three-point play.

Granite Hills head coach Jerry Parker had seen enough and appropriately called a timeout with 3:01 left. Whatever he said to his team in the huddle was effective, because Santana's bid for an upset ended right there. Hayley Garner made a three-pointer and Cora Leonard added two baskets for Granite Hills while their defense shut out the Lady Sultans for the remainder of the game. The 9-0 run in the last 3:09 gave the Eagles a 53-41 win.

"We know we're a better team than this. We sometimes play down to our competition, " Jimenez said, "Coach kinda scares us with no-ball practices. It's kind of motivation for all of us."

The no-ball practices Jimenez alluded to feature a lot of running -- the educational kind. With the win, it appears that the Eagles have avoided such punishment and they will be able to practice with basketballs; their record improves to 14-6.

With the hard-luck loss, Santana dropped to 5-15. "We played really hard on defense, but shots just weren't falling. We missed a lot inside the paint," Padberg said about Santana's loss, "It was a good game, it was a lot of fun, but we're still disappointed."