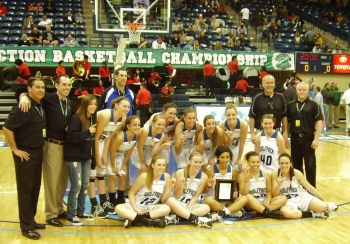 (San Diego) March 5 - The Lady Wolfpack of West Hills High School captured their second straight girls Division II sectional basketball title Friday night with a 40-25 win over the Lady Wolverines from Westview High School (Rancho Penasquitos). The two teams faced off at the Jenny Craig Pavilion on the campus of USD, the site of all CIF San Diego Section championship basketball games throughout the weekend.

The domination continued in the second half for the Lady Wolfpack as Westview was unable to generate enough offense to overcome the huge deficit they started the game out with. The 25 points they scored is less than half their average of 52 points per game. 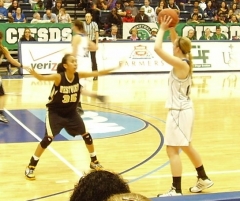 "We just had to work hard as a team, we had to get out on their shooters, because they are a very good shooting team. So our coach just emphasized closing out and we watched a lot of film, so we knew a lot of their plays," said Marilyn Naderhoff about the defensive strategy.

It's not like West Hills did much offensively either. They only made about a third of their shots and their final total of 40 points was below their average, also 52 points per game. However, with the way their defense played, West Hills did not need much offense to win Friday night, and they had no problem taking home their second straight sectional title.

"Our defense was great, [We] struggled shooting the ball, but defensively we knew what they were going to do and we stopped it; just happy with the defensive effort," said coach Ryan Kinser.

"It's incredible, we are so lucky to have done it twice; two years in a row at that. So we feel really good right now," said forward Sherika Miller about Friday night's win.

West Hills improves their record to 24-6 with the win and as mentioned earlier, wins their second straight sectional title, also the second in school history. They face the Chargers of Huntington Beach Edison (23-5) at home Tuesday.

"I think we're excited to play. We want to get past the first round this year, because we did not do that last year, so that's our goal. We won CIF last year so we set new goals for this year too," Miller added about the state tournament. 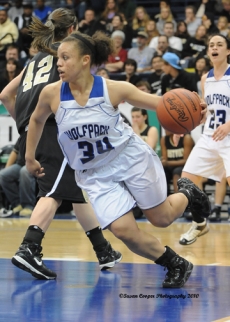 No matter what happens in the state tournament for the Lady wolfpack, this season will mark the end of an era for many players on the team, who have played basketball together for nearly a decade.

"All five of us have been together for so long, it's our last championship together and it's just hard to think about," Naderhoff said about her teammates, "we've been playing together since the second grade."

Westview drops to 26-5 with the loss, but their season continues with a state tournament game at home on Tuesday against the Panthers of Pomona Diamond Ranch (26-3).