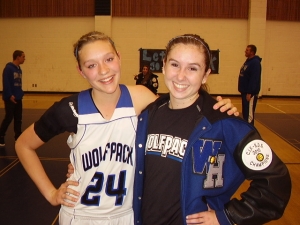 " I just sprinted as fast as I could and went in for the layup."  -- West Hills player Emily Cole on her game-winning shot

February 27, 2011 (Santee) - Bedlam erupted in the West Hills High School gym Friday night (2/25) after Emily Cole scored the game-winning layup as time expired to lead the Wolfpack to a 37-36 win over the visiting Conquistadors of San Diego Serra High School.
"It was one and one and [Serra player Tia Griffis] missed the shot, so Haley got the rebound, she threw it to me, I just sprinted as fast as I could and went in for the layup," said Cole about receiving the pass from teammate Haley Forsberg.
"I thought she was going to pull up and shoot it, because I didn't quite look at the clock," said West Hills' head coach Ryan Kinser, expecting a longer range jumper from Cole.
Her decision to go for the higher percentage layup turned out to be a wise one, given that the team struggled with their outside shooting the whole game. The shot was the second 'buzzer beater' of the game for Cole, who earlier connected on a desperation shot from half-court as the thrid quarter ended, one of just a few outside shots that went in for West Hills.
"It was two seconds left, I think and I just got the ball and threw it up and I don't know, I just hope it goes in and it went 'Swish!' and I'm like, 'That's cool!'," said Cole.

The Conquistadors led for much of the game with a 12-9 lead at the end of the first quarter and a 22-16 lead at halftime. The Wolfpack defense had no answers in response to the play of Thameena Azziz and Tylinn Carter, who combined for 18 first half points.
Whatever control the Conquistadors had in this game was limited by their inability to get the scoring surge they needed to close out the Wolfpack. Forsberg and Taylor Ingraham were able to score inside for West Hills in the second half, combining for nine points in the third quarter. This allowed the Wolfpack to not only keep the game close, but also slowly chip away at the Conquistadors' lead.
"We just started pressuring them, playing harder on defense and we started not letting them make those easy passes in and getting those easy shots," said Forsberg about the Wolfpack's improved defense.
A look at the second half scoring shows how well the Wolfpack defense really played. They outscored Serra 21-14 and held the Conquistadors to just three fourth quarter points.
Cole's half-court shot at the end of the third quarter was such a huge boost to the Wolfpack's comeback bid that it likely changed the complexion of the game. Instead of trailing by five points at the end of the quarter, West Hills only trailed by two, 33-31. The three-point differential was critical in a game where scoring did not come easily for both teams.
Scoring difficulty was never greater for both teams than it was in the fourth quarter.  The Wolfpack scored just six points, only slightly better than the Conquistadors' aforementioned three point total during the same interval. Both teams used a full court pressure defense that prevented their respective opposing offenses from getting good scoring opportunities.
Another reason the game was such a low scoring contest may cause both teams' coaches to stock up on Grecian Formula: turnovers. The Conquistadors had a total of 25, while the Wolfpack was not far behind with 24. That's a lot of potential scoring opportunities wasted by both teams.
"Worst shooting night of the year for us. We shot terrible inside, outside -- that didn't help. Had too many turnovers, but defensively, the second half we executed what we wanted to do. The first half we did not, we gave up too many offensive rebounds the first half," said Kinser about the team's overall performance.
The Conquistadors finish the 2010-11 season with a 16-14 record, but look for a playoff return next season. The young team will benefit from this playoff experience and only loses two seniors to graduation from their 14 player roster. Azziz led all scorers with a total of 15 points.
The Wolfpack were led in scoring by Cole with 12 points and Forsberg with 9. Their record improved to 19-9 overall with the win and they advance to the semifinals of the CIF-San Diego Section playoffs. Their next game will be in Rancho Peñasquitos at Mt. Carmel High School on Tuesday (3/1).
"It was an ugly win, but we'll take it. At this time of the year you just take a win no matter how ugly," said Kinser.
The Sundevils will be a formidible opponent for the Wolfpack, with an overall record of 22-7 and 7-3 in Palomar League play. Their last game was a 54-40 win at Ramona, also on Friday night (2/25).
The winner of this semifinal game will face either Monte Vista or Westview at the Jenny Craig Pavilion on the campus of USD, for the CIF San Diego Section Championship, Friday (3/4).