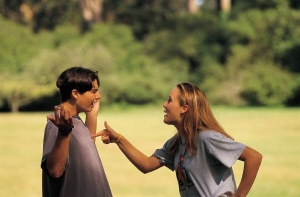 September 30, 2014 (San Diego’s East County) --Girls will be girls, and boys will be boys. That seems to be the finding of a new study that’s found dramatic differences between the genders when it comes to how kids learn.

The American Psychology Association reports on some surprising results of a study done on over a million boys and girls at schools in 30 different nations.  The researchers, a pair of psychology professors, found that girls get better grades—all around the globe.

Girls scored better at all grades, from kindergarten to college-- and in all subjects, including math and science.

But does that mean girls are just naturally more brilliant, or could there be another explanation?

Among the hundreds of students tested, it turns out that boys lagged a full year behind girls in self-regulation. That means girls were more conscientious, better at following directions, planning ahead and prioritizing assignments than boys the same age.

So how can we get boys to perform better in class?

One option might be to put less emphasis on organization skills, perhaps being more forgiving if boys space out and leave their homework at home.

Another alternative could be to include types of learning that appeal to boys’ competitive and rebellious natures – encouraging free-for-all brainstorming sessions, or what some academics call “disruptive discussion.”

Of course, if boys are lagging a year behind girls in self-discipline and organization skills, the simplest answer may be what many kindergarten teachers have long advised parents:  hold young boys back a year before starting them in school, to maximize their chances of success throughout their academic career.