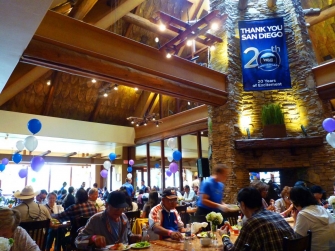 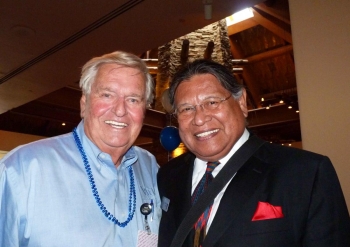 September 14, 2011 (Alpine)—It took a tribe—and some extra teamwork in the kitchen—to serve up 4,000 free meals at the Viejas Casino’s Harvest Buffet in Alpine yesterday. The event was all part of Viejas’ 20th anniversary celebration, as tribal leaders decided to give back to a community that has helped support their thriving business ventures.

“It wasn’t easy,” Steve Robbins, Viejas executive chef/director of food and beverages said of the logistics involved. “I’ve got a culinary team of about 60 people here.” 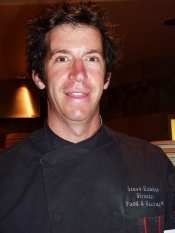 The team served up 2,500 pounds of chicken, 1,500 pounds of shrimp and 800 pounds of potatoes to guests who feasted on plated meals which included Cajun shrimp, chicken, au grautin potatoes, vegetables, side salad and cupcake. 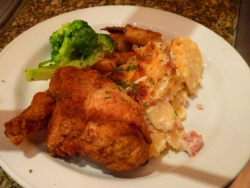 “We went through four dry runs and tested everything out early, tasting variations,” said Chef Robbins, who has prepared bigger banquets in the past in Las Vegas and Tahoe. “For a complimentary plate of food, this is as good as it gets!”

Busloads of guests packed the lodge-themed restaurant from 9 a.m. to late at night, savoring the fruits of Robbins labors. Seemingly everyone pitched in to help. 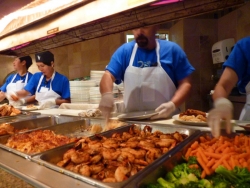 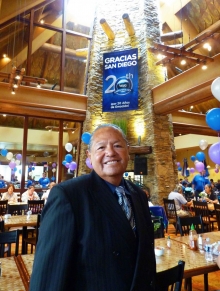 ECM caught up with Charlie Brown, the tribe’s director of community relations, wearing server’s gloves and dusting flour off his suit. Asked what he’s doing to help out, Brown grinned. “Anything they ask me to do. I’m bussing tables and serving food,” he said, adding that he’s receiving many thank yous from Viejas guests. 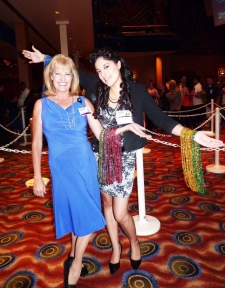 Viejas Chairman Anthony Pico said the concept was “management’s idea—it seemed like the right thing to do…I’m very proud of our team members,” he said.

In the Dreamcatcher lounge, lines, greeters handed out glittering beads to visitors lined up for the festivities.

On the Casino floor, some guests tried their luck in a slot machine tournament or entered a drawing for a gleaming Corvette car to be given away later this month, as the anniversary promotion continues. 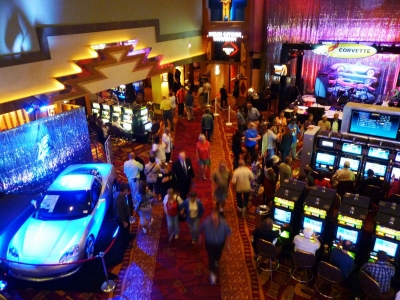 Viejas began its business ventures two decades ago with a limited number of gaming tables. Today, the casino has over 2,000 slot machines and 50 gaming tables. The tribe also runs an outlet shopping

mall across the street, which includes family entertainment venues such as a bowling alley, arcade, and during the holiday season, the county’s largest outdoor ice rink. A California Welcome Center, the first on tribal lands, recently opened in the outlet center. Next, the tribe plans to add a hotel on its Alpine reservation.

This isn’t the first time the tribe has shared its generosity with neighbors. Viejas has donated many thousands of dollars to fund area firefighting, providing training for county, state, federal and local firefighters each year at the reservation. The tribe built a fire station in Alpine, off the reservation. Viejas helps fund the Viejas Wildfire & Emergency Alerts operated by East County Magazine. The tribe has also donated to help schools and charitable organizations across San Diego County.

The tribe hosted yesterday’s free-meals giveaway to show its appreciation to community members for supporting Viejas through the years at an event that proved a win-win for both Viejas and the community.