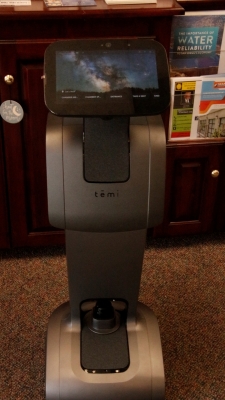 May 7, 2022 (El Cajon) -- Imagine walking into a building. Instead of being greeted by a person you are greeted by a robot. It sounds like a scene from a sci-fi story but it’s now reality. The San Diego East County Chamber of Commerce had an introduction to its new robot assistant, TEMI, last month. This assistant is able to answer questions about East County.

In a demonstration, a presenter asked a question about Santee Lakes, which Temi responded to in detail. TEMI, also mobile, can move around an area or it can be programmed to follow people. This is not meant to replace human jobs, but to help humans do their jobs better by taking on simple tasks that may take away from more important tasks, Todd Brinkman explained to us. You can view the video here.

Brinkman is the founder of Virtual Reality for Main Street LLC, a company dedicated to bringing new emerging technologies to cities.You can look at their website here.

“These technologies are already out there in South Korea and other parts of the Eastern world. We want to bring that to the U.S.,”  Brinkman said. The main goal is to bring American cities into a future that is already happening elsewhere in the world.

In addition to TEMI, the company is also working on Virtual Reality, or VR, in different fields. Two of the projects shown at the East County Chamber of Commerce were VR Ministries for prisons and Project Piercing Glimpse.

The VR Ministries are meant to bring prisoners closer to their religions by having them attend church in VR. The difference between watching a video and a VR experience is that the latter is about immersion and presence. While watching a video, our minds are not fully invested in the moment; when we are actually there or under the illusion of actually being somewhere, we are more invested in what is happening.

During the tech demo I was able to experience a VR rollercoaster ride. The feeling of it was exhilarating. It felt as if I was actually on the coaster while just sitting with headsets on. The VR ministry project is offers to reach prisoners on a level they have not been able to reach thus far.

The other project being developed is Project Piercing Glimpse, which will be geared more toward tourists—allowing them to take a sneak peek at what U.S. cities have to offer instead of just reading about it online or through a friend. An example I was shown was a video of a café. The headset viewer can step into a café or store, have a look around and maybe, while that is happening, the viewer hears the owner talk about his business.

“This isn’t about conservative vs. liberals, this is about new ideas vs. the old ones,” explained David Lofy, CEO of toPointC, a company that is working on using VR as a way to train people. Instead of watching training videos, this method of training will bring the new employee into a virtual world where they will answer questions, and learn the skills required for their new job. “This is the next step,”Lofy said. They call it remote reality training. You can look at toPointC website here.

Other examples discussed included helping the elderly through VR to connect into the world, so that those who are not able to get out of their homes can still see fireworks on the Fourth of July. People who have trouble moving around can also use robots as personal aides. In addition, the technology can be used to help convey how homeless people live, by not just telling and showing video or photos, but by allowing a person who puts on a VR headset to experience what it is like to live in a tent and on the streets; connecting people more closely to issues in communities.