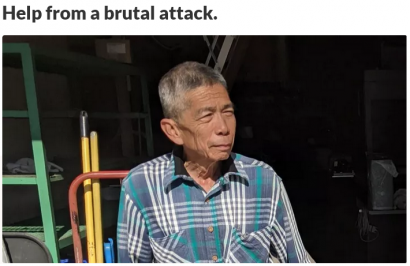 The victim, Jose Serra, was interviewed today by 10 News. Still in the hospital, he said the assailant had asked him on the trolley for directions to Spring Street. Soon after they got off in El Cajon, Serra says, "He just pulled out the knife and started slashing. It was a complete surprise."  A bystander came to his aid after he fell to the sidewalk. He adds, “It feel good, feels good to be alive."

Investigators are looking into whether the assault on Serra, who is Filipino, may have been a hate crime.

November 12, 2021 (El Cajon) – The victim of a brutal stabbing attack in El Cajon was on a ventilator in a hospital intensive care unit, after suffering stab wound injuries to multiple major organs, his intestines, head and hand.

The vicious assault by a stranger also cut an artery and nearly severed an ear, according to Todd Jones, who has set up a GoFundMe account to help his 71-year-old friend and colleague.

The GoFundMe site withheld the victim’s name to protect his safety, since his assailant is still at large. Jones told 10 News that he’s known the victim for more than 20 years and that he “wouldn’t hurt a fly.”

The victim had suffered some health issues and recently lost his job as a janitor.  So, Jones hired him to do some odd jobs at a warehouse. The elderly victim had taken the trolley to Arnele Avenue in El Cajon and was a block away, walking toward the warehouse, when he was savagely assaulted on November 3 shortly after 5 a.m. by a suspect with a foot-long knife.

The assault was caught on surveillance video. El Cajon Police have identified the suspect as Israel Ezekiel Valdiva and asked public help to locate him.  ECPD Lieutenant Randy Soulard has confirmed that the assault was “entirely random and unprovoked.”

He is considered armed and dangerous; the knife has not been recovered.  Valdiva has a long history of serious crimes including arrests and/or convictions for elder abuse, assault with a deadly weapon, possession of a dirk or dagger, robbery, escape from custody, drug and theft charges. He is currently on parole after serving six months for assault with a deadly weapon.   “Valdivia immediately violated his probation conditions and now has a warrant for his arrest for the violation,” Lt. Soulard says. Valdiva’s whereabouts are unknown but he is believed to frequent San Diego and Chula Vista; he also has ties to San Bernadino.

Valdiva is Hispanic, 5’11”, 180 pounds with black hair and brown eyes and a medium build. Valdivia has numerous tattoos on his body, as well as a large “V” tattoo on his face. If you see him, do not confront him; call 911 as soon as it is safe to do so.

“We need to get this guy, because a guy that works a knife like this could definitely kill anybody,” Jones writes on the GoFundMe page.

He adds, “It is sad to say that we live in a world of chaos, however, these are times to rejoice and help our friend and coworker get back on his feet…We are asking for prayers and monetary help to cover any expenses for when he gets back home. With no family in San Diego, we take it upon ourselves to see him through this tragedy.”