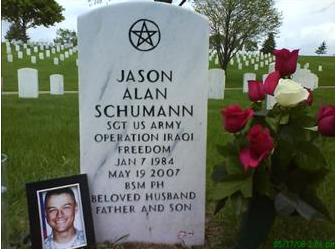 After President Donald Trump drew criticism for not calling families of U.S. soldiers killed in Niger, he accused former presidents of not calling fallen soldiers’ families to offer condolences, though all other presidents did so. Trump then insulted the widow of Army Sgt. La David Johnson, saying he “knew what he was signing up for," failed to praise Johnson as a hero, and left her crying after his call. Trump called the Congresswoman who reported his remarks a liar, even after the slain soldier’s mother confirmed the Congresswoman told the truth. Other families of soldiers killed confirm Trump never called them. Now Gold Star mother Candie Glisson has penned this open letter to the President, originally published by Common Defense PAC:

October 19, 2017 (Washington D.C.) -- My son was killed in Iraq. Here’s my message to Trump: On October 4th, 2017, four of our troops were killed in an ambush in Niger. For twelve long days, we didn’t hear a word from this Commander in Chief. Twelve days. Total silence.

On Monday, he said he was “too busy” to pay respects to the Gold Star families (although he had plenty of time for golfing, sabotaging our health care, and trying to ban Muslims). Finally, last night, he called one of the grieving mothers. But instead of offering sympathy and remorse, he callously said that her son, Sgt. La David Johnson, “knew what he signed up for.”

This is beyond the pale, even for Trump. When my son, SGT Jason Alan Schumann, was killed in Iraq 10 years ago, George W. Bush sent me a heartfelt letter. Now we have a president who degrades our fallen heroes, then calls their mourning families liars on Twitter.

This goes so far beyond party politics. Trump is a dangerous liar. He fabricated the truth on national television by claiming no previous president ever reached out to Gold Star families. He tried to use fallen heroes to score political points.

Now, after saying La David Johnson should’ve known better, Trump is accusing a Gold Star widow and a Gold Star mother of making the story up.

When George W. Bush contacted me, he didn’t brag about it. He did so quietly. When Barack Obama met fallen soldiers at the airbase in Dover, he didn’t take to Twitter or turn it into a politicized photo-op. I may have disagreed with Bush, but at least he was respectful, humble, and dutiful.

Glisson is the mother of Army Ranger Sgt. First Class Jason Alan Schumann, who was killed a decade ago in Iraq.

The whole world is watching.