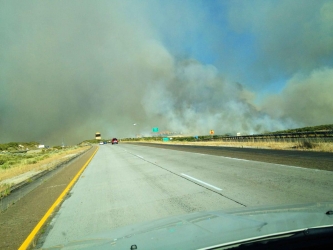 June 17, 2012 (Campo)—The Golden Acorn Casino in Campo has been evacuated as a precaution, Cal-Fire spokesperson Roxanne Provaznik advises.  The Old Fire is now 300 acres at 7:40 p.m. Winds have shifted, pushing the fire east toward Boulevard.

The fire is located south of Old 80 and east of Miller Valley Road (TB Map 1299 81) , according to Cal Fire. A Sheriff’s news release describes the location as near Old Highway 80 in the Crestwood area south of I-8. One structure has been destroyed.

According to the San Diego County Sheriff’s Department, about 40 people have also been evacuated from homes.  Eastbound Highway 94 is closed at Church Road and Old Highway 80 is closed at Crestwood and Sierra Del Sol.