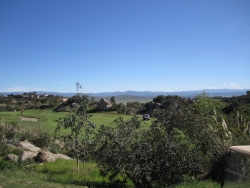 Story and photos by Jeremy Los

At only a little over 6,000 yards from the back tees, the par 70 layout challenges players not with length but rather with tight fairways, well placed bunkers, and small greens. The driver rarely comes out of the bag for long hitters, as the smart play on most holes is to use long irons or fairway metals. 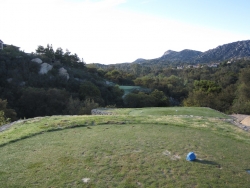 Mt. Woodson is target-golf; wayward tee shots are likely to find the trees or canyons that line many of the fairways and poor iron shots are all but guaranteed to miss the tiny greens.

When on the green the adventure doesn’t end; Mt. Woodson’s greens are fast and sloped considerably. The greens are in pristine conditions, creating pure rolls and true putts.

Playing it early in the morning, dew was still present on the grass while teeing off on the first hole. Since this was the first time that I have played the course, I paid the price for using driver off the tee, as I had to play my second from the right rough leading to an opening bogey. 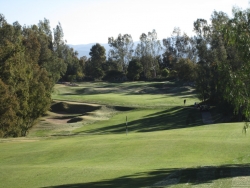 With only a couple of holes measuring over 400 yards on the front nine, I pulled out the driver twice more on the opening nine - which takes players up and down the mountain - on my way to shooting a meager 44.

A birdie on the par 4 eighth led to a near hole-in-one on the par 3 ninth. Not to be out done, my playing partner knocked his tee shot on the ninth to a cozy two feet.

My spirits were raised a bit when making the turn, as I realized that I had only lost two balls. One was on the par 3 third hole, which requires a tee shot to clear a canyon and favor the left; mine sadly favored the right side and found the waiting canyon. I lost my second ball on the par 5 fourth due to a pushed second shot that I still think cleared the trees on the right side of the fairway. 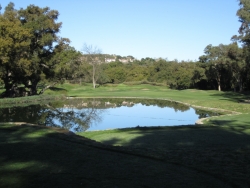 The back nine at Mt. Woodson is longer and in my opinion more challenging than the front nine. Players are brought back up the mountain, creating more uphill holes that play longer than their yardage.

On the par 4 twelfth hole tee shots from the back tees must clear 230 yards to reach the fairway. It is on this hole that I was met with the stunning wildlife that roams the grounds. A 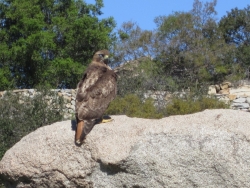 beautiful hawk rested on a rock not far from my ball; I became too enamored with the hawk as I ultimately bogeyed the hole.

The back nine is highlighted by back-to-back par 5s that create scoring opportunities for longer hitters. The 13th hole plays long and uphill; tee shots must be accurate as out-of-bounds lines the right side of the tight fairway. The 14th allows a bit more leeway with tee shots and plays considerably shorter as the hole plays downhill.

On the 15th driver gets put away again as players should use long irons off the tee to give them the best shot at making birdie. I played a 5 iron over the hill at left myself an easy sand wedge shot into the small green.

Players finish their round with a wonderful finishing hole. An elevated tee shot must be accurate as water is on the left and trees are on the right. A driver leaves a short iron shot into another small green protected by bunkers and a lake. I will not disclose my score on the hole, but will warn you to take one extra club on the second shot or risk finding the water. 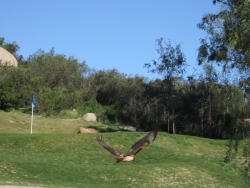 I left feeling satisfied with my round and the course. I would like to see it lengthened a bit as I feel that it could create an even more challenging of a course. I have never played so many shots with my sand wedge or my three-wood.

Mt. Woodson’s views and course maintenance were highlights for me. The course was in great shape and the greens were in excellent condition. The price was not too bad either, with reservations made on golfnow.com I got on for $43 on a Wednesday morning.

I highly suggest this course for players who can control their shots and who like to think their way around the course.  Mt. Woodson golf course is located at 16422 North Woodson Drive, Ramona 92065. For more information, visit www.mtwoodsongc.com.

Looks like a great golf course! I would love to golf there some day. christian dating

the scenery here is just so amazing i wish i could take my family here for a picnic.

example of a resume
I have never been to Mt. Woodson. I bet that would be a great place for a golf course. And those photos were really fantastic. You might have challenged yourself to have a goal on this golf field because of its scenic place. I think this place would also be best for a picnic ground.