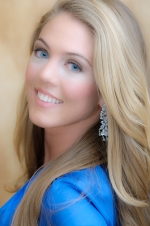 October 8, 2010 (El Cajon) -- Cottonwood Golf Club in El Cajon is hosting a tournament fundraiser for Sierra Billock to support her in her mission to become Miss California USA 2011. The tournament will be held on Sunday October 24, 2010 with a 12 p.m. shotgun start.

The entry fee is $100 per person and includes a round of golf, range balls, golf cart, on course contests, and a full course meal during which a raffle and silent auction will be held. Non-golfers can also show their support by attending the dinner for only $40 per person or by making a donation in any amount. A portion of the proceeds from the day’s events will help cover the entry fee and costs associated with Sierra’s participation in the Miss California pageant.

Billock is a recent graduate of San Diego State University where she earned her bachelor’s degree in Marketing. She was recently hired as a business management intern at local advertising agency. In her spare time she enjoys playing golf, spending time with her dog, Cupcake, and volunteering. She was Miss Santee in 2009 and acted as a city ambassador and spokesperson representing our community. She attended countless city events and donated over 200 hours of community service throughout San Diego County.

But Billock did not stop there. She saw that the scholarship funding for the pageant had been severely diminished by the downfall of the economy and decided to produce a fashion show fundraiser to expand opportunities for future pageant winners. She organized clothing from local retailers and contacted former Miss Santee and Miss La Mesa pageant titleholders and contestants to model in the show. In 2009, over $2,500 was raised for scholarships and donations to local charities. In fact, the event was such a success that she held the 2nd annual show in August and brought in over $3,000 for future scholarships

If you are interested in helping Sierra in her quest for the title of Miss California USA 2011, you can contact Susan Billock at 619-820-3514 or susanbillock@cox.net for more information and registration forms. The deadline for forms and fees for the golf tournament and dinner is October 15th. Donations will be accepted until the pageant which will be held on November 20th and 21st. The final night of competition will air on television across California on November 21st.