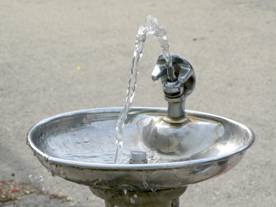 April 27, 2017 (Sacramento) -- Assemblywoman Lorena Gonzalez Fletcher (D-San Diego) won approval yesterday from the Assembly Education Committee for her legislation that will require all school districts and colleges to test for lead contamination in their water supplies. Assembly Bill 746 was approved on a bipartisan, unanimous vote.

“Lead exposure has real consequences and it’s unacceptable that children and teachers could be poisoned by drinking from the water fountains at school. School districts and colleges need to be proactive in making sure their students and staff are drinking safe, lead-free water.” Assemblywoman Gonzalez Fletcher said. “Protecting the health of our kids is our first priority, and right now, we don’t know if they are truly being protected from lead in their drinking water.”

Gonzalez Fletcher introduced AB 746 to require all public pre-K-12 schools and Community College, California State University and University of California campuses test their water for lead contamination. If elevated levels of lead are found, the bill requires the contaminated water sources be shut off immediately, and that staff and parents of students be notified of their potential exposure to lead. In January, administrators at La Mirada Elementary School in the San Ysidro community of San Diego announced that the water being served at the school tested positive for lead.

Officials at the school were first alerted to the potential contamination after contractors working on an unrelated issue noticed problems with the water and suggested school officials investigate. Following the announcement from La Mirada Elementary, two other schools – Emerson-Bandini Elementary and the San Diego Cooperative Charter School 2 – tested their water and discovered lead contamination as well.

According to the U.S. Environmental Protection Agency, there are no safe levels of lead. Long-term exposure to lead causes a number of health problems, including brain damage that affects learning and mental abilities. A national survey completed by Reuters News in 2016 found that California was home to eight of the zip codes with highest lead contamination rates in the nation.