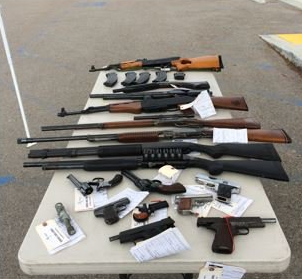 Gun buy-back programs are usually sponsored by local police departments, often in partnership with local community organizations. During these events, a person who turns in a firearm typically gets a voucher or gift card in exchange.

Many gun buy-back programs issue gift cards to large retailers. But some, such as Walmart, sell firearms and accessories such as ammunition among other items.

The programs locally have been successful at taking many weapons off the streets. Just last Saturday, San Diego Police announced that a gun buyback event was so popular that the department ran out of gift cards after giving away over $25,000 worth of the cards, including some for Walmart.

AB 1903 would prevent a person who gets a voucher in exchange for a firearm from then using that voucher to buy a new gun. More broadly, the bill would also prevent these gun buy-back events from increasing business for retailers who are contributing to gun proliferation.

Gonzalez-Fletcher says giving taxpayer money to gun retailers is “outrageous and counterproductive at a time when gun violence is a national epidemic,” adding, “The last thing we should be doing is giving a person who turns in a gun a voucher to a place that sells guns.”