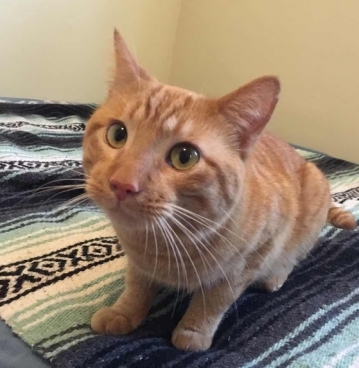 February 16, 2017 (La Mesa) - An orange tabby cat struck by a vehicle February 3rd on La Mesa Blvd. near Rosehedge Drive was rescued by a passing motorist and provided emergency veterinary care.  "Diego," as the lucky cat has now been named, may have used up one of his nine lives, but fortunately he's healed and will be heading to a new home tomorrow.

Garrett Ostrowski says a woman helped him wrap the injured and bleeding animal in her hooded jacket.  "I put him on my passenger seat.  I got him to calm doing while doing 100 miles an hour to the emergency vet at 2317 Hotel Circle in Mission Valley," Ostrowski posted on the Mt. Helix Nextdoor forum. "They got the bleeding stopped." 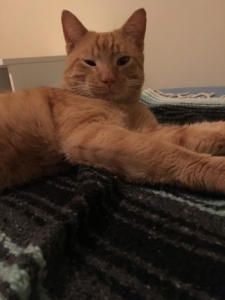 The cat was then sent to the El Cajon Animal Shelter, where he has spent the past two weeks recovering from injuries that included a detached retina and missing tooth.

Ostrowski praised staff at the El Cajon shelter.  "The people there couldn't have been nicer or more of a help," he wrote. "Every time I called they were nice and helpful. The vet was awesome and was clear with me every step of the way. I think for what they have and what they deal with on a daily basis they did a hell of a job."

Ostrowski made the decision to pick up the ginger tabby and keep him temporarily while finding a forever home, since his original owner has not been found and had allowed the cat to wander onto a busy street.

Yesterday, he posted photos with this cheery news, "He's home!!! I introduce you to Diego. He has a clean bill of health. He is quite the little love bug too. He's a little freaked out but in great spirits to be expected after the 2 weeks he just had." 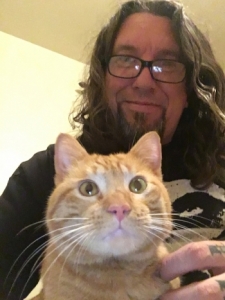 Today, in an e-mail to East County Magazine, he wrote, "Diego is going to be headed to his new home tomorrow. He was going to go today but I really felt it would be better to let him rest one more day and honestly I wanted one more day with him. He is so starved for attention! He is such the little lover and I get the feeling he knows who I am.Tomorrow he will leave for LA to live in a nice big house with a side screened-in patio with a koi pond to enjoy with his two new brothers and two loving parents that work from home, so there will be no end to the attention. Mission accomplished!"

Ostrowski's post s drew more than 135 replies on the Next Door forum, with neighbors anxiously awaiting progress reports, then expressing gratitude to Ostrowski for saving the cat's life.

One neighbor summed up the sentiments of many when she wrote, "Garrett, you and this orange cat are both celebrities within our neighborhood!! :-)"

This cat is adorable! I wish I could adopt it. I love all kinds of animals, but sadly, I am allergic to them. However, I would give a hug to Orange nevertheless :) John

Spay and neuter your pets. Cats are the leading killer of birds. Feral cats are the worst.
I have a bird bath in my yard and a humming bird feeder on my porch. A neighbors cats stalk birds and I shoo them away.

where I live I wish they would eat more birds. the non native birds are destructive and have no place.