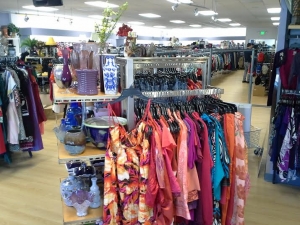 July 7, 2014 (Lake Murray) –Goodwill Industries of San Diego will open a new retail store and donation center on Thursday, July 10.  The new site will be located at 6127 Lake Murray Boulevard in La Mesa (next door to Big Lots). 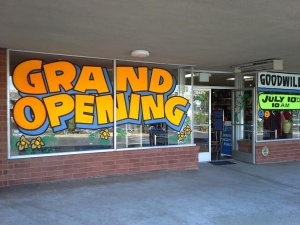 The La Mesa Chamber of Commerce is helping Goodwill celebrate by staging a ribbon cutting at 10 a.m. with local Goodwill and neighborhood dignitaries.  This store and donation center will be open seven days a week.  Stores hours will be Monday through Saturday 9 a.m. to 8 p.m. and Sundays 9 a.m. to 5 p.m.  The donation center is open now.

“We love this community, and when this space became available we jumped on it” said Beth Forsberg, Vice President of Operations.

“It is so gratifying to open a new store and donation center like this because every new facility creates jobs for our neighbors, and now we’ve also created an easy local place to donate “added CEO Mike Rowan.

The donation center just behind the new store is one of Goodwill’s free electronics recycling centers.  In addition to accepting donations of clean reusable clothing and household items  seven days a week, they also accept computers, televisions, cell phones and other consumer electronics (working or not) at no charge.  Goodwill also has several other donation centers in the city, including MTS Trolley stations.

Richelle Normand, Goodwill’s Director of Retail Operations shared the fact that the opening of the retail store has created 28 new jobs in this location alone (19 full time, 9 part-time).

This is the second Goodwill store opened within the City of La Mesa in a little over three years. The first store, opened in 2011, is located in the signature Clocktower building in La Mesa Village.

This new store and donation center in Lake Murray is significantly larger and will feature Goodwill’s signature branding and more than 3,354 square feet of retail space as well as a boutique area.

Goodwill® Industries of San Diego County is a 501(c) (3) not-for-profit community based organization, part of an international network of independent local charities sharing a common vision. Goodwill’s mission is ‘To get people with disabilities and other barriers to employment jobs by developing their skills and work habits through training and real work.’ Goodwill also offers employment related programs that serve people with varying levels of ability, giving everyone the skills, the time and the confidence to get to work.

San Diego's Goodwill chooses NOT to conduct traditional fundraising activities; instead the charity uses revenue gained from selling donated items; fee-for-service, reuse, recycling and salvage activities to fund the operation of paid job training programs and employment services. The local Goodwill has more than 1,400 employees in San Diego County, and is headquartered in Pt. Loma.