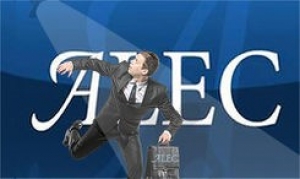 September 23, 2014 (Silicon Valley) – A growing number of companies are heeding their customers requests and  ending their affiliations with the American Legislative Exchange Council, or ALEC for short.  ALEC works to get model, right wing conservative measures benefitting corporations enacted in legislatures across the nation. Here in California, ALEC is chaired by East County’s State Senator Joel Anderson.

The latest to dump Alec is Google, for what Google’s chairman Eric Schmidt calls ALEC’s pattern of “lying” about climate change and ignoring science.

Schmidt states, “The facts of climate change are not in question anymore…The people who oppose it are really hurting our children and our grandchildren and making the world a much worse place.”

Other companies that have terminated their association with ALEC include Microsoft, General Motors, Coca Cola, Proctor & Gamble and Bank of America.

ALEC has also drawn ire from many for its  union-busting and anti-civil rights stances, its support of legislative favoring insurance companies over consumers, and its push for lax regulation on tobacco, among other controversial issues. ALEC has also supported privatizing public education and prisons, the website AlecExposed reveals.

ALEC is funded almost entirely by large corporations including the oil industry, pharmaceutical and tobacco, corporations, as well as the billionaire Koch brothers who also funding launch of the Tea Party movement.

Now, through the power of the Internet and social media, ordinary citizens who lack the financial resources of powerful corporations are finding that there is power in organizing online—leveraging consumers’ buying power to persuade corporations like Google and Microsoft to take steps to protect the public interest over the interests of corporations.

The decision taken up by Google is appropriate and also other companies who have dump Alec.