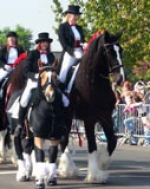 August 10, 2009 (El Cajon) The historic Mother Goose Parade is in jeopardy of going dark this year--unless organizers can plump up their nest egg fast.

“We need to get the word out that we need to raise at least $150K minimum to put on this parade,” a letter from parade organizers revealed. “With the economic times hitting everyone, this is the time we need an entertaining parade the most—to bring smiles and something positive to families, especially our kids.”

The parade’s volunteer board of directors started up a “Save the Goose” campaign a few weeks ago. Children have sent in dollars from their savings to help save the parade, but much more is needed by mid-September or organizers will be forced to cancel the 63rd annual Mother Goose Parade, which is the largest parade of its kind west of the Mississippi River. The November parade features floats, giant inflatable balloon characters, clowns, marching bands, equestrians, and finishes with the arrival of Santa Claus to usher in the holiday season. View photos and video of last year’s parade: http://www.eastcountymagazine.org/?q=holidays_in_east_county_269

“This effort and call from the children even makes us want to work that much harder to ensure this parade happens this year for them,” the organizers’ letter states. “We do not want to disappoint the kids. We have some great well known tweens and teens celebs already scheduled to come down for the parade which is one of the highlights for the kids - evidenced by their screams when they see them and even have the opportunity to get autographs from them.” This year’s parade theme is Storybook Friends.

Sponsorship packages are available to large donors and tax deductible donations can be made through a 501c3 sponsoring organization. Memberships are also available. In addition to the parade, organizers also provide educational programs year-round as well as scholarships.