May 2, 2018 (Santee) - Assemblyman Randy Voepel should resign for lying about his service record, says his Republican rival and an allied military critic in the wake of new videos of Voepel claiming combat experience.

In one, Voepel says he was a machine-gunner on a patrol boat in V 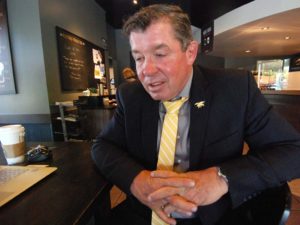 ietnam’s Mekong Delta in 1969-70. In another, he says he “did some infantry fighting” and describes the smell of a blood-soaked uniform.

“You get a weird coppery taste in the back of your mouth,” he told a Veterans Day ceremony last year in El Cajon — intimating that he had experienced that odor.

“Especially what gets me is doing ‘SEAL insertions,'” said Wilske, a Navy SEAL veteran who had a friend “who got shot through the teeth doing a SEAL extraction.”

“These are … honorable people that this guy is bandwagoning on,” Wilske said. “And that’s not cool by any stretch.”

On Tuesday, Voepel said in a statement that in 1970, he served on the USS Gurke, “which participated in support operations with Task Force 116 and Task Force 117 within the Mekong Delta region and other coastal areas.”

He said: “Those operations included supporting SEAL Team inserts, PBR operations and other activities in the area. During that time period, in multiple instances, I would man a single .50-caliber machine gun under supervision of our gunner mates for defense and possible offense.”

Voepel, in his statement to Times of San Diego, said earlier attacks on his service record have been shown to be false by multiple media outlets. (They include reports by NBC San Diego, KGTV-Channel 10 and The San Diego Union-Tribune.)

“When my opponents were given evidence that contradicted their claims, they stated that evidence was altered,” he said. “When given additional evidence supporting my record from the Pentagon, they claimed it was the Navy that was wrong, not them. Last week, they dug up videos of committee hearings, recorded three months apart, and ran them together in order to allege I had made claims I never made. With prior false accusations falling flat, they are throwing whatever they can at the wall and hoping it sticks.”

Voepel said he was proud of his service record, and “I won’t be responding to further attempts to discredit my service.”

Voepel is vice chair of the Assembly Committee on Veterans Affairs, but fellow members including San Diego Democrat Todd Gloria and North County Republican Rocky Chávez did not respond to requests for comment.

Voepel, in the video, is heard identifying himself and his service:

“(In) 1972, I was on the USS Buchanan, … the only ship off the DMZ where the North invaded the South in ’72, in April, and the ship got hit with 130mm artillery. We had one killed and seven wounded. So I couldn’t get any luck at all. I got shot at the whole damn time.”

Wilske said the part about the guided-missile destroyer Buchanan (once ported in San Diego) was accurate.

“If all he did was stick to the truth, we say: ‘Thank you for your service’ and call it a day,” Wilske said.

But the Task Force 117 account isn’t true, Wilske insists, calling it evidence of “irrefutable stolen valor” that “completely meets the threshold” of state and federal laws against wrongly claiming military service or honors.

Violators can be removed from public office.

“I would say the right thing to do at this point is to have the appropriate law enforcement agencies look into this, as well as the state Assembly,” Wilske said. “And call on him to immediately resign from office.”

Retired Master Chief Petty Officer Hoey, whose April 16 news conference in front of the USS Midway laid out other accusations of valor theft by Voepel, said in a statement to Times of San Diego:

“Randy Voepel never served one day with Task Force 117. He was not stationed on small boats operating in the riverine and intercoastal waterways of Vietnam, and he was never a bow gunner inserting and extracting U.S. Navy SEALs. This story is a long and bizarre string of lies.”

Hoey challenged the Republican lawmaker to tell what squadron and Army or Navy unit he served in, plus hull or boat numbers. “And give us the name of one person who can verify your accounts.”

“Voepel’s ghastly false accounts of bravery, heroics and combat action are a direct slap in the face to all who legitimately served honorably and fought so courageously in Vietnam,” Hoey said. “The Stolen Valor community is calling on Voepel to resign NOW!”

Hoey says Voepel’s service record — obtained through a Freedom of Information Act request — indicates the Navy radarman was in boot camp, “A” school and then aboard the USS Gurke during the time he claims he was serving with TF-117.

“The claim is foolish because most legit vets would cite their unit,” he said. “That would be like me sayin’ I was with the Sixth Fleet in the [Mediterranean].”

(Voepel’s office did not respond to a request for his unit or boat numbers.)

Monday night, after viewing a video first posted to YouTube, two leaders of the Mobile Riverine Force Association — made up of Vietnam veterans who served in Task Force 117 — responded with suspicion.

“As far as I know, no destroyers were ever part of 117 and sure never worked with insertions, ambushes, search and destroy missions,” said Ralph Bigelow of Livonia, Michigan.

If Voepel’s released service record is true, Bigelow said via email, “It would seem his speech [raises] some questions.”

Don Blankenship of Ramona, secretary of the association, said: “It seems we may have a wannabe in Mr. Voepel. He mentions he was on a Patrol Boat River, which is also referred to as a PBR. PBRs were a part of Task Force 116, not 117, which was the Mobile Riverine Force, or MRF.”

However, Blankenship said too many question marks exist to declare Voepel guilty of stolen valor. He said he wanted more facts than the video provides.

Wilske said he didn’t consider political advantage in disclosing the videos now — when Democrats might decide to wait until after the June primary to make a move against Voepel.

“This is a nonpartisan issue,” Wilske said. “I’m not hedging the campaign on this — the timeliness of any of this.”

He called the Voepel claims “a separate issue” and said: “I don’t care if it takes one week or one year. He needs to be held accountable for this.”

Wilske said if Voepel wanted to do the “dignified thing with some class,” he would return more than $100,000 in campaign donations “to the people who gave him money in earnest and in good faith.”

“There’s no unringing this bell,” he added.

Voepel concluded his Veterans Day remarks by saying: “Now that I’ve painted that wonderful picture in your mind [of the coppery smell of a blood-soaked uniform], when you see a veteran, you don’t know what they’ve been through. You don’t know what’s skidding around in their head.”

Maybe cut and past in the full url.

A House Democrat has identified himself in a lawsuit involving claims of sexual abuse against a minor in order to deny the allegations. Rep. Tony Cárdenas (D-Calif.) called the allegations "categorically untrue" through his lawyer, identifying himself as the target of a lawsuit claiming he sexually abused a 16-year-old he met at a golf tournament in 2007.
Were (written as told) by the infamous Richard Marcinko in the Rogue Warrior books.
Grandfather, not all of them have mental health issues, but this one is nearly a sociopath and clearly pathological in his lies. What's next? His story of personally rescuing and conducting "field surgery" on John Rambo?
Please add a SPEW ALERT! I spit my coffee on my fresh blouse after reading your comment. Dry cleaning is expensive. Great post!!!
You have it straight FROGMAN, Clown Voepel is not fit for office, by his own words. Voepel's stories are filling up our in boxes. We would urge all good citizens if the 71st District to contact Ken Stone of the Times of San Diego and Miriam of ECM to report what you have seen and heard directly from Voepel’s yap flap trap. His wild stories of military derringer-do will facilitate the end of his comedy filled time in elected office.
Just another self inflated, pompous politician... Do all of them have mental health issues? One that stands out in every day news is obviously a narcissist.
Grandpa, He had such a marginal and underwhelming naval career he either was asked to perhaps leave or just quit ... after some 16 years. He never retired, we were in the mid of the end of the Cold War ... and he just left. As a MCPO that is called a clue and after reviewing his records we know why he left. So, he gets out knowing he essentially failed at establishing a solid career as he had no personal awards, bad sea shore rotational balance, did not qualify In a warfare specialty and could not advance to Chief Petty Officer. I believe, based on my skill and experience, 32 years in the Navy and having sat 4 promotion boards, Voepel made up a new naval career that he shopped around for years, because the truth of his real career was less than impressive as compared to what he could just make up. But, he is a text book Valor Thief: technically wrong on everything; all stories are unbelievable; and often tales of wounds, blood, death and comrades are involved. Legitimate, sincere and credible Vets never talk the way Voepel does. And by the way in 1969 and 1970 he was not a Petty Office 1st Class as he may have wanted all to believe in his disgusting tales of PBR gunning on the Mekong ... he was at best a Radarman Seaman. His stories are being chopped up by doing simple math. Seaman Recruit to Seaman Apprentice = 6 months. Seaman Apprentice to Seaman = 6 months. He describe the weapon on the bow of PBR incorrectly as well. He claimed he did SEAL inserts. A load of crap. Then he came out with that cowardly statement about USS GURKE supporting TF-117. BS, never happened. TF-117 had been disestablished. The GURKE never supported TF-117. And he never manned a .50 cal on the bow of USS GURKE. Any qualified Sailor knows where the crews weapons are located, it ain’t the bow. Every time we find a video we analyze it and slowly leak it out. We have others in safe keeping. Voepel and his Chief of Staff should just resign now before they have to explain away the next video. One which has no explaination at all. MCPO OUT