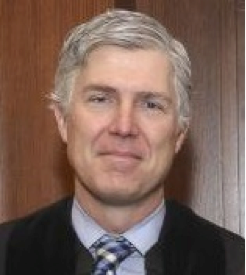 April 12, 2017 (Washington D.C.) – Neil Gorsuch begins his duties this week on the Supreme Court after the Senate invoked the ‘nuclear option’ to change long-standing Senate rules and block a filibuster by Democrats. All but two Democrats had agreed to vote against confirming Gorsuch, including California Senators Dianne Feinstein and Kamala Harris.

Gorsuch joins a divided court and will likely be the swing vote in close decisions.

A staunch conservative, Gorsuch is likely to follow in the voting tradition of the late Justice Antonin Scalia, a staunch conservative.  The court is expected to soon decide landmark cases that could roll back key labor protections and women’s reproductive rights, potentially even reversing Roe vs. Wade.

Gorsuch will first have to go through long-standing traditions aimed at teaching humility to each new Justice. These include serving on the high court’s cafeteria committee to plan meals, taking notes during closed-door conferences and rising to open the door if someone knocks while the justices are in the conference room.

Gorsuch takes over these newcomer duties from Justice Ellen Kagan, the second most recent appointee to the high court.

In 1990 Roberts wrote a legal brief for the Supreme Court in a case regarding federal funding for abortion providers. “We continue to believe that Roe v. Wade was wrongly decided and should be overruled,” Roberts wrote. His brief added: “The Supreme Court’s conclusion in Roe that there is a fundamental right to an abortion finds no support in the text, structure or history of the Constitution.“ But during the 2003 Senate confirmation hearings on his appellate court nomination, Roberts took the position that abortion rights were no longer debatable. ”Roe vs. Wade is the settled law of the land,“ he told lawmakers. ”There’s nothing in my personal views that would prevent me from fully and faithfully applying that precedent.“ -- here. . . .NOTE: It's not the government's prerogative to define our fundamental rights, so not finding something in the Constitution is irrelevant.