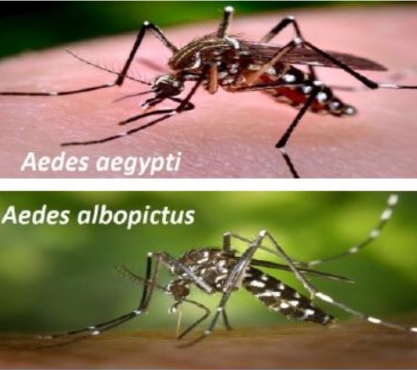 August 28, 2019 (San Diego) – Lakeside resident Dennis Richardson was appalled to discover that “thousands” of Yellow Fever mosquitos were breeding in water dishes under potted plants at his home.  His grandfather was a sanitation engineer who worked to eradicate Yellow Fever so that Americans could build the Panama canal and later battled a Yellow Fever epidemic in Peru. Richardson says, “This work was deadly for most who did the work, as most got yellow fever.”

Yellow Fever is fatal 20 to 50 percent of the time. It’s most obvious symptom is yellow eyes and skin (jaundice).  Fortunately, this disease is not present here, but could take hold if one of these mosquitos were to bite a returning traveler with the disease. In the past, Yellow Fever epidemics in the past have killed thousands in U.S. cities including New Orleans, Memphis, Charleston and as far north as Boston and Philadelphia.

There is a vaccine for Yellow Fever, though it is not advised for anyone with an allergy to eggs, gelatin or chicken protein, pregnant women, or anyone with a thymus condition or certain immune deficiency conditions.  Read more on the vaccine.

Aedes mosquitos can also transmit other diseases such as Zika virus, Dengue fever and Chikungunya. 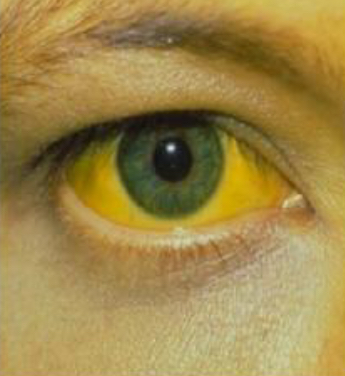 County Vector Control is conducting aerial larvicide drops on local waterways – and is asking the public’s help to report and eradicate these dangerous and annoying pests.

Supervising Ecologist Chris Conlan has stated, “The risk is there. We really need the public’s help. It breeds in backyards and small little water sources." As little as a thimbleful of water can become a breeding ground – and in our warm climate, the invasive mosquitos can thrive throughout the year—with human blood as their food source.

The County will provide a free inspection of your property on request to identify mosquito breeding spots and advice on how to eliminate any mosquitos found there. You can call San Diego County Vector Control number at 1-858-694-2888

Residents are asked to get rid of any standing water and report mosquito activity.

This map shows areas where Aedes mosquitos have been found in San Diego County so far this year, with clusters in East County communities that include Santee, Lakeside, El Cajon, La Mesa and more: 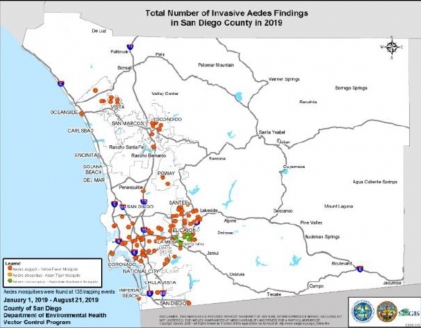 As the weather warms up, reports of mosquito activity ison the rise.

The Cajon Valley Union School District sent a letter to parents warning of a “sharp increase in mosquito populations and bites.”

On the Next Door forums in Mt. Helix and La Mesa, many residents posted about experience aggressive ankle-biting mosquitos.

Locations of scheduled larvicide drops can be found here. The County says the larvicide is not harmful to humans or pets.

Below are some of the resources and advice from the County:

Help Fight The Bite, watch this short video to learn how! (Spanish version)

Tips to prevent mosquitos from breeding:

Every week, dump out and clean containers holding water (indoors as well as outdoors) 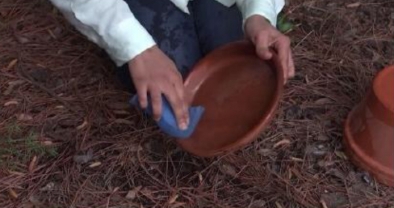 Protect yourself from bites:

Put screens on windows and doors to keep mosquitos out.

Wear long sleeves and pants when outdoors to protect against bites.

Invasive Aedes mosquitoes are black with white stripes on the legs and back, small, and bite during the day.