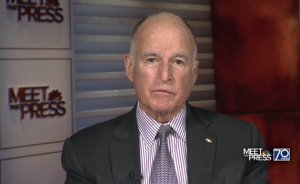 August 7, 2017 (Sacramento) - Gov. Jerry Brown said California may sue the Trump administration over its threat to cut federal funding from cities that refuse to comply with the federal immigration crackdown.

“I think a few judicious forums to resolve this dispute between the federal government and California…can be very helpful for the whole country, and in a dispassionate way,” Brown said.

The governor made the comments during an interview with NBC’s Chuck Todd that will air Sunday on “Meet the Press.”

Brown said that the decision would ultimately be up to the Golden State’s attorney general, Xavier Becerra, but noted that “politicians talking past one another” had failed to resolve the issue.

U.S. Atty. Gen. Jeff Sessions announced last month that state and local governments seeking funding must certify they are not so-called “sanctuary cities,” which do not assist federal authorities in enforcing immigration laws.

Chicago Mayor Rahm Emanuel said his city plans to file a lawsuit Monday against the Trump administration, claiming it is illegal for the federal government to withhold public safety money.