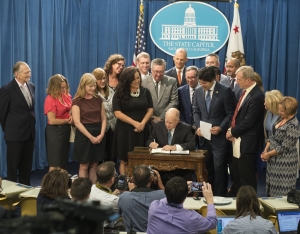 October 8, 2018 (Incheon, South Korea) – California must get 60 percent of its energy from renewable resources by 2030 and 100 percent clean energy sources by 2045, under the landmark Senate Bill 100 signed into law by Jerry Brown as one of his final acts as Governor. Days later, the United Nations Intergovernmental Panel on Climate Change issued a new report for policy makers, written by over 90 scientists and supported by more than 6,000 peer reviews. The report, delivered at a meeting in South Korea, warns that the earth is on track to warm 1.5 degrees Celsius as early as 2030, just 18 years from now.

The Nobel Prize-winning group urges world leaders to take action to avoid that scenario, which they say would have “life of death” consequences” for millions of people around the world. But they concede they are not optimistic about the likelihood of world leaders doing so.

If future human-caused warning could be cut to just a half degree Celsius, instead of the one degree agreed on in the Paris Climate accord, here is what could be achieved, according to the scientists.

Coral reefs might be saved from dying and irreversible melting of the gigantic West Antarctica ice sheet might be avoided, meaning sea levels would rise four inches less than forecast.

Heat waves and droughts would be reduced, and a half million people would be spared from suffering lack of water. Deaths from heat and infectious tropical diseases would also be reduced.  Habitat would also be saved. If nothing is done, half of all animals and plants may go extinct, scientists have warned.

Natalie mahowald, a lead author on the report and scientist at Cornell University, makes clear that this is a “life or death” situation for many people around the world.

But to avoid the dire consequences of rapidly accelerating global warming would require immediate and deep cuts in emissions of greenhouse gases. Jeori Roegli, another of the scientists from the Imperial College in London, says the Paris agreement’s limits are “clearly insufficient.”

What would it take to reach the lower temperature goal that scientists say is needed to forestall disasters?   Cutting annual carbon dioxide emissions in half by 2030 and to near zero by 2050, while also dropping emissions of methane and other greenhouse gasses, as well as shifting away from coal, oil and gas to renewable resources.

California has shown that this challenge can be met, but thus far, much of the rest of the world has failed to take action and the U.S. as a whole has backpedaled on climate changed action under President Donald Trump, who withdrew the U.S. from the Paris Climate Change Accord signed by all but two nations worldwide. Trump has implemented policies reversing climate change action, ramping up coal production and oil extract while rolling back emission limits and incentives for renewable energy investment.