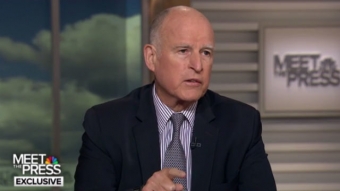 March 27, 2017 (Sacramento) -- Gov. Jerry Brown warned the Trump administration Sunday that attacking California over immigration “could blow up in your face in a giant recession.”

Brown, who is in Washington and appeared on NBC’s “Meet the Press,” said the Trump administration should be careful interfering with the Golden State because of its size and economic power.

“California is America. We’re 12 percent. We’re a key part. The export capital going into the Pacific. We’re the innovation capital,” the governor said. “You don’t want to mess with California because you’re going to mess with the economy and that could blow up in your face in a gigantic recession and roll the Republicans right our of this town.”

Trump has said California is “out of control,” but Brown defended the state’s record on job creation and innovation, and said immigration is a key contributor to the state’s dynamism.

“Last year we created 400,000 jobs or more. So the taxation, the regulation, the immigration — the 2 million undocumented people — all that is contributing to the most prosperous economic engine in the world,” he said.

If California was a separate country, it would have the sixth largest economy, ahead of France but behind the United Kingdom.

Brown, who was a Jesuit novice before turning to law and politics, said Trump’s planned wall along the Mexican border isn’t “Christian” and has the “odor” of totalitarianism.

“The wall to me is ominous. It reminds be too much of the Berlin wall,” he said.

Brown is acting exactly like Wallace, figuratively standing in the door. When Wallace did that, the Kennedys federalized the state National Guard to force compliance with federal law. Every liberal in the country was overjoyed. The situation here is no different. A state governor refuses to obey federal law. Trump should federalize the California National Guard and force compliance. Baring that, then we liberals are saying that a step backwards to the days when states decided who could go to which school, which genders could marry, etc. is appropriate. Liberals cannot have it both ways, e.g. federal control when it suits them, states rights when it doesn't. Make up your minds.
There is a strong argument to be made that the United States was constituted to be a federation of states, the word state normally used for independent countries, the U.S.A. being a federal arrangement and not a structure with a strong central national government and province-states (not really states) as in other countries. So Governor Brown is asserting that California is a state with its own self-defined rights and not a province subservient to people in far-off Washington. California decides who its citizens are, etc. says Brown. (Meanwhile Brown recently has asked Washington for money four times, not cool.)