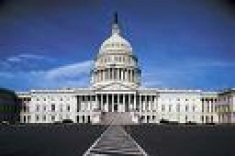 The trillion dollar spending bill is a stop gap to fund the federal government through September – except for Homeland Security, which would be funded only until February, since Republicans want to block funding for immigration reforms announced by President Obama once the GOP takes control of the Senate in January.

Critics warn that the bill could lead to another taxpayer bail-out of big banks. Warren contends that if Dodd Frank is to be revised, it should break up big banks, not restore their power to make risky investments that put taxpayer dollars at risk. Warren, a long-time champion of consumers, has been touted as a potential Presidential contender though thus far she has said she will not challenge Hilary Clinton, the front runner among Democrats.

But Senator Lindsey Graham (R-South Carolina) claims Warren is “the problem” and says if Democrats follow her lead and block the bill, it could lead to a government shut down just as Republicans caused in 2013 in their effort to block funding for the Affordable Care Act.

The provision has ired East County resident Bonnie Price, who says she called her representative, Congressman Duncan Hunter’s office to complain about the Dodd-Frank provision.  “His aide hung up on me,” she states. “So I called back and expressed my anger that Dodd-Frank legislation would be changed to allow the big banks to get away with more risky investments, like the ones that caused the great recession. I have a right to complain because I lost many assets by the meltdown,” she adds.

The spending bill also includes $554 billion for military spending including $64 billion for war funding, $5 billion to fight ISIS and a 1% military and civilian pay raise, as well as $479 million to buy new planes for the Air Force and Navy that the Pentagon didn’t request. There is also a funding boost for oversight of Veterans Affairs over patient care.

The measure would also increasing funding for the Centers for Disease Control to fight Ebola, beef up security at U.S. embassies worldwide, eliminate all funds for Common Core state standards and reduce funds for other Obama education reforms, increase funding for food safety, increase money for the National Institute of Health, and slash funds for the Internal Revenue Service.  In addition it would require mail service to continue six days a week, ending efforts by Rep. Darrell Issa (R-San Diego) to eliminate Saturday service.  The bill provides zero funding for nuclear waste storage at Yucca Mountain.

The bill would also make clear that government contractors can become whistleblowers to report wrongdoing even if they have signed confidentiality agreements.

Wash Post reported earlier this (Sat) afternoon that "...senators approved a stopgap measure that extended funding until Wednesday, averting a potential government shutdown that would have started at midnight."