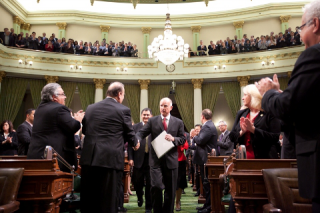 January 22, 2012 (Sacramento ) – Governor Jerry Brown laid out his vision for restoring California’s reputation as a leader in innovation, job creation and renewable energy in his State of the State speech last week.

“Wherever I look, I see difficult choices,” he said of the budget decisions to come. “But I also see a bright future up ahead and a California economy that’s on the mend.”

The good news is that in 2011, California personal income grew by almost $100 billion and 230,000 jobs were created, a rate much higher than the nation, Brown observed. But he acknowledged that unemployment remains too high—and called on voters to support a ballot measure asking for a temporary tax increase to fund education while the economy gets back on track to restore a portion revenues lost during the recession.

“Without new revenues, draconian cuts will take place,” Assemblywoman Toni Atkins (D-San Diego said in reaction to the Governor’s speech.” Cuts that could impact San Diego include fewer resources to combat wildfires, chopping three weeks off the education calendar for school children, raising college tuitions, cutting lifeguards at beaches and slashing funds for courts, impacting public safety, Atkins cautioned. She noted that the Democratic majority in the Legislature worked with him to produce an on-time budget that eliminated over three-fourths of California’s ongoing budget deficit, though more must be done to close the gap.

The Republican legislative leaders rolled out a video blasting the Governor’s speech—but swiftly drew fire when their video of GOP Senate leader Bob Huff was leaked early. “Zzzzz” tweeted Brown spokesman Gil Duran, “Republicans post tired talking points in taped ‘pre-sponse’ to a speech that has not yet been given.”

"My speech wasn't finished 24 hours ago," Brown chided Republicans as he prepared to deliver his speech. "I didn't know you were psychics." He added, "After the speech, I want to check with you on some stock tips."

Brown predicted that the state’s laws requiring a shift to renewable energy resources will be an economic incubator similar to the role it played in creating millions of high-tech jobs.

He further addressed job creation by tying it to improving the state’s financial stability—which in turn should best be done through a temporary tax increase to boost revenues and balance the budget, rather than make steeper cuts, in his view.

“Although our state’s economy has started to recover, we will not create jobs we need unless we get our financial house in order,” Brown said. He called on politicians on both sides of the aisle to work together to resolve the state’s financial issues because the “stakes are too high” if California’s economy is not stabilized.

Thus far, Republicans have unanimously opposed any form of revenue increase for the past several budgets, forcing cuts-only budgets that have trimmed fat but also caused severe impacts on local schools and healthcare programs, elimination of redevelopment funds, and more.

He also reiterated support for high-speed rail construction, despite controversial cost overruns, as a means of improving transportation and creating construction jobs to help refuel the state’s economic engine.

He outlined additional goals. “My intention is to make California again a leader in job creation, renewable energy and state of the art efficiency, innovation of all kinds and a solid primary and secondary education. Our universities are world renowned and I intend to see that they continue to enjoy the respect of students and scholars throughout the world. W e also have to restructure our criminal justice system, carefully realign state government functions, and streamline state government.”

At times, Brown offered inspiration. “We have the inventors, the dreamers, the entrepreneurs, the venture capitalists and a vast array of physical, intellectual and political assets,” he said, noting that people come to California to fulfill such dreams in a place that has long been a leader, not a follower. “When I first came to Sacramento, Steve Jobs and Steve Wozniak had not yet invented their personal computer. There was no wind generated electricity, and we didn’t hve the nation’s most advanced building and appliance efficiency standards as we later adopted. Of course, Yahoo, Google, Facebook and Twitter did not exit—not even in someone’s imagination,” the Governor recalled.

Republican State Senator leader Bob Huff said his party’s vision is to “enable business, make government lean and more responsive, and you’ll get what you want.” But he reaffirmed the GOP’s opposition to any tax increase to close the budget gap.

Governor Brown lent some support to enabling business and making government leaner, calling for a stripping away of “unreasonable regulations that stand in the way of investment and job creation.” He also affirmed a need for some pension reforms.

But Brown also made clear, “My plan to rebuild California requires a vote of the people …it would be unconscionable to tell the electors of this state that they have no right to decide whether it is better to extend current tax statutes another five years or chop another $12 billion out of schools, public safety, our universities and our system of caring for the most vulnerable.”

The ballot measure proposed by Brown would raise $5-7 billion through a short-term hafl-cent sales tax increase and by raising the income tax on people earning a quarter mililon dollars or more.  A poll by the Public Policy Institute shows that 65% of California voters surveyed said they support the tax-increase initiative to fund education.

Alluding to changes occurring around the world empowered by youth, he noted, "When democratic ideals and calls for the right to vote are stirring the imagination of young people in  Egypt and Tunisia and other parts of the world, we in California can't say now is the timet o block a vote of the peole...When the elected representatives find themselves bogged down by deep differences which divide them, the only way forward is to go back to the people and seek their guidance."

Barbara O’Conner, director emeritus of the Institute for Study of Politics and Media at California State University in Sacramento, offered this assessment of the speech. “He is realistic and honest and his agenda is out in the open. He had enough in there to alienate most groups in California or provide an opportunity for their constructive involvement,” she concluded, the Sacramento Bee reported.